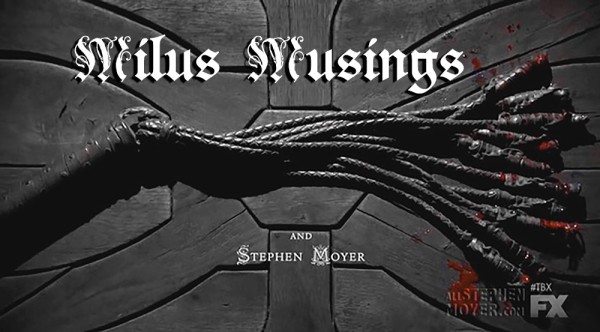 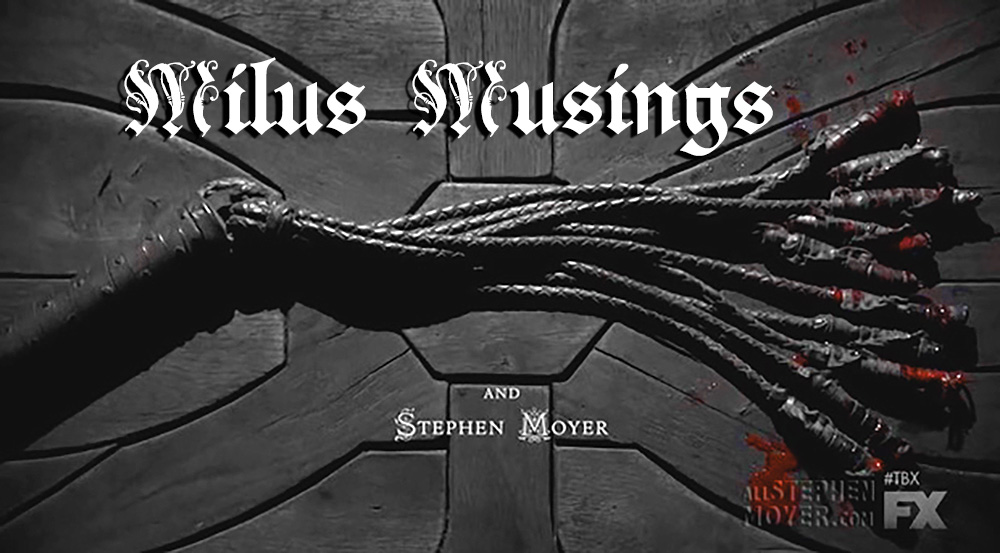 You win some and you lose some in the game that Milus is playing in The Bastard Executioner and last night we saw him win one, but miserably lose the other. However, in the end, it’s the Baroness who saves the day providing Milus some solace!

Milus is part of two main storylines in this episode. The first, getting Maddox/Brattle to do his bidding and the second is to somehow maneuver Gaveston into his power.

Since the Baron died, the main goal of everyone is to save Ventrishire from being broken up and given to other English lords and barons. No matter how you look at it, sex and power are equally involved, whether it be that Baroness Lady Love is with child or, if Milus will be able to outwit Piers Gaveston and get him under his control. 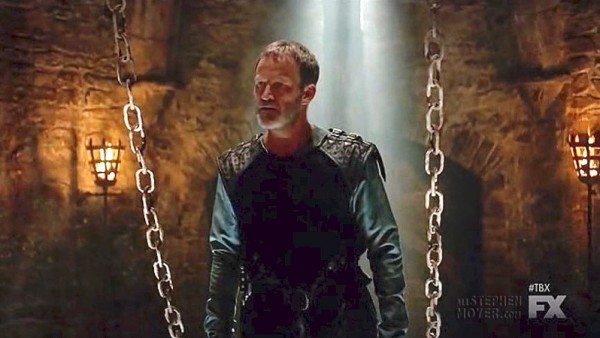 Early in the episode Milus asks Maddox/Brattle and Toran Prichard to do a job for him.

Maddox/Brattle’s Welsh friends are still captive in the dungeon, and he and Toran are attempting to share some food with them, when Milus arrives. Milus tells them that he is in need of their skill and confidence. He continues saying that. “the fate of Ventrishire hangs by a thread and Baron Pryce senses our weakness and woo’s the King’s favor in the hopes that Edward will grant him the land that was once his.”  He tells them that “his majesty has a passion for religious relics that that Baron Pryce is sending him a holy thing salvaged from a cave off the Nile.” He explains that it is traveling to Windsor today and he wants them to destroy it.  “Bring down the guards, burn the relic in the cart that carries it.”  He reassures them that the blame will fall on rebels and thieves and Pryce will not have suspicion if there are but “charred remnants that leave no clues.”  Maddox at first refuses, but Milus says he will free the Welsh captives and their sentences will be reduced to servitude. Finally, Maddox/Brattle agrees.

The two men go and do in fact, kill the soldiers and burn the caravan. However, as the cart is burning, they hear a woman screaming from inside. When opened, they discover that the contents of the caravan is not a religious relic, but instead Baron Pryce’s wife. 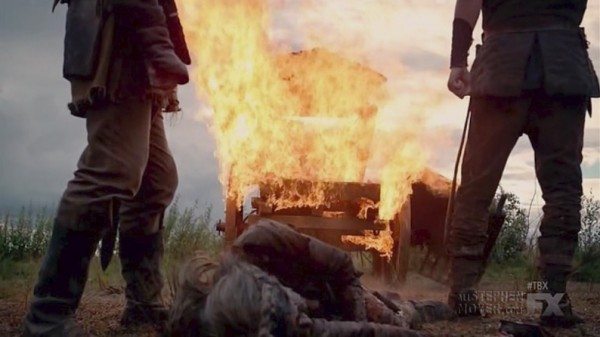 When Maddox/Brattle returns to Ventrishire, he storm in and punches Milus. They struggle in a brutish fight, but Frenchie arrives to break it up.  When it’s over, Milus gets up bloodied, saying: “This is who we are Wilkin Brattle.” Maddox/Brattle responds, “you knew she was in that wagon; you don’t make those kind of mistakes.” Milus’ response is “I did what was required, as did you. We all share the burden to protect the shire.”  When the guards arrive, Milus tells them that they were engaged in a “friendly demonstration of defense” and Maddox/Brattle leaves. 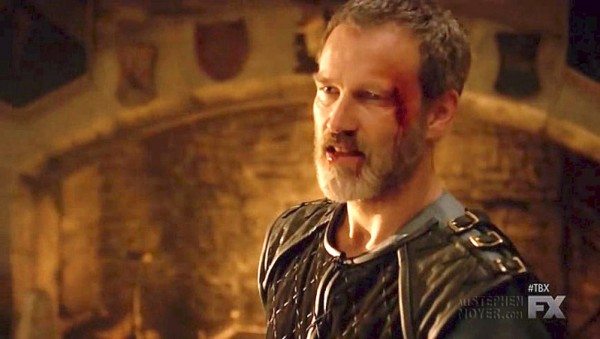 So, in this effort Milus has won the day since a major obstacle, namely Pryce’s wife, is no longer in the way of his plan to get Baron Pryce to marry Baroness Lady Love.

The baroness is not pregnant. We really knew this at the end of the last episode, but it is confirmed early on when she brings her maid her blood soaked nightdress for cleaning. Milus is still in the dark about the story she told to the King’s Earl Gaveston, but he quickly learns of the tale when Gaveston arrives at Ventrishire with a “Piss Prophet” (hence the episode title) to decide definitely if she is indeed with child. 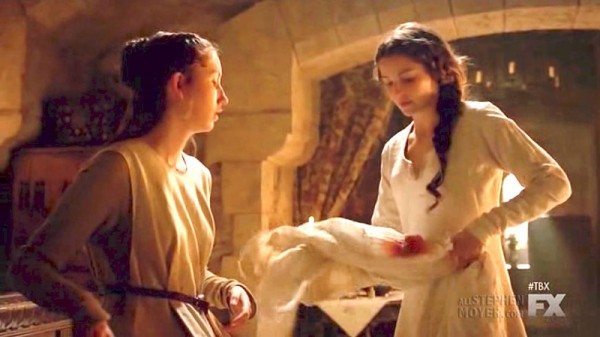 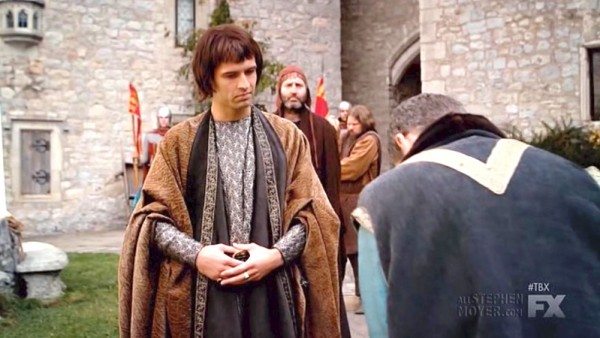 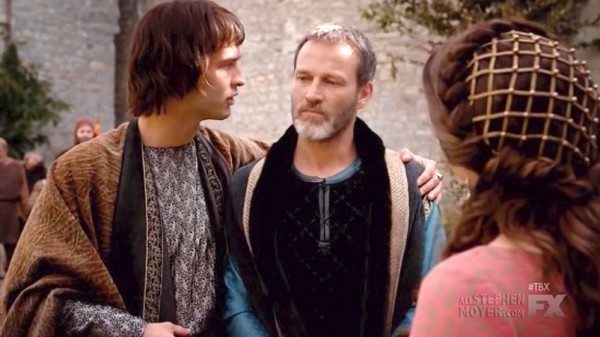 As the Earl is shown to his guest chamber, the Baroness quickly apologizes to Milus that she didn’t share the news of her pregnancy with him sooner. He replies by saying, “The happiness I feel for your news heals any wounding of my pride Baroness.” He then offers his help in any way that will best serve her. 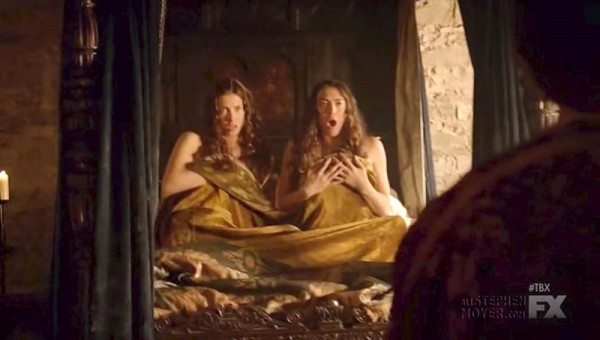 As Gaveston leaves for the guest chamber, he notices the two twins that had been sent to Ventrishire as a gift to the Baroness when her husband died. Milus has had his way with them and thinks them in his control so, he suggests that they might amuse Gaveston. When Gaveston arrives in his chamber he finds the two girls carousing in his bed. At first he seems annoyed, but then, he happily joins in.

Later the twins come to Milus claiming that Gaveston is more interested in him then in them, suggesting some sort of liaison between the two men. Milus jumps to the bait and we see him next having a meal with Gaveston. 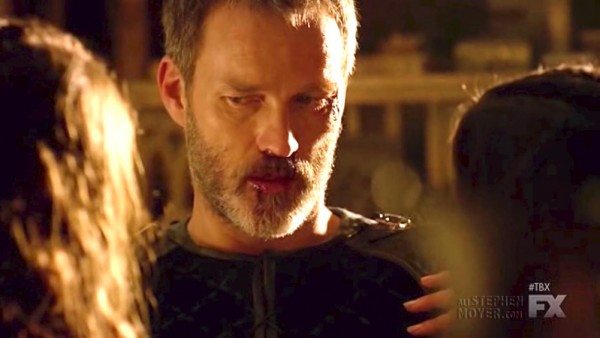 He asks Gaveston, “why Ventrisure? Why do you take such effort to secure our humble slice of moss, forcing the decree of division, traveling all this way to find the proof of Eric’s heir, it makes one wonder if you are looking for a place to hide?”  Gaveston replies, “Ah yes, like you sweet Milus I was forced to storm the hive to get the honey, but now the bees, they come to sting. “ 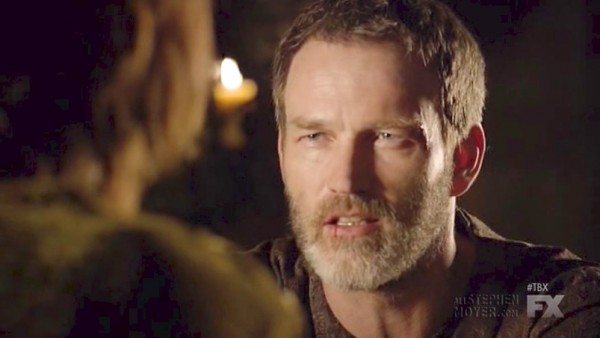 Gaveston then rises to his feet saying “My tongue seems to loosen when my cock rests in a handsome mouth.”  Milus replies, “It seems we share the gift of forwardness as well,” and rises to stand in front of him. Milus looks down, but Gaveston says, “No, it will be much more pleasurable if you were on your knees.” Milus reluctantly does as he wishes, but as he begins, he is quickly pushed aside by Gaveston who says, “Do you honestly think I would let dirt born lips touch a rod that knows only beautiful things?” He then tells Milus to “Go” saying, “I’m sure there is a shit scraper in need of a suckling.” 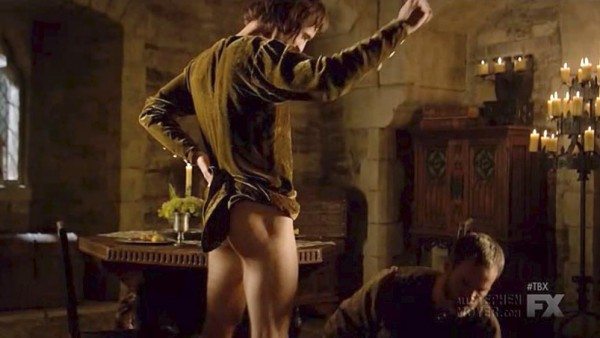 Milus leaves in shame and goes to his chamber where he finds Frenchie preparing his bed. It’s pretty obvious that Milus thinks Frenchie told the Earl of their previous encounter together. And, so as soon as he sees him, he begins to brutally beat him. In my opinion, Frenchie is true to Milus and it was instead, the twins, (who are really Gaveston’s half-sisters) who told him of Milus’ encounter with Frenchie. 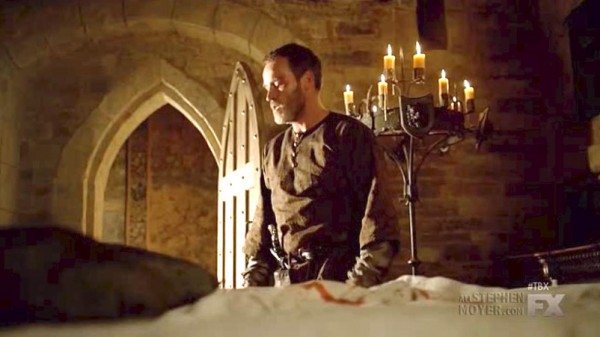 Click here to see more in the 1.05 Photo Gallery.

THE BARONESS SAVES VENTRISHIRE FOR NOW. 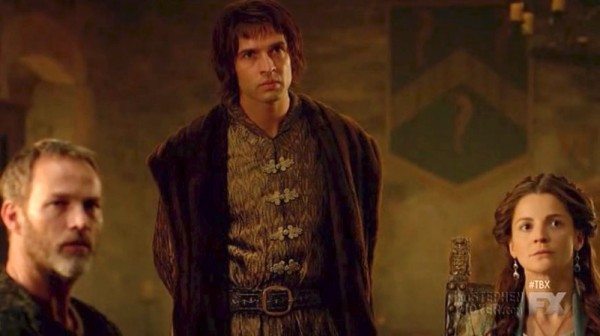 At the end of the episode, the Piss Prophet reveals that the Baroness is indeed with child. She really isn’t of course, but Annora has provided the Baroness something to put into her morning urine that will fool the prophet into believing that she is pregnant. When the Profit makes his announcement, Milus shows his shock and Gaveston his fury.

And, Milus has the last word, when he then turns and says to Gaveston, “A wager as worthless as your journey to Ventrishire.” I doubt that Milus will make the same mistake with Gaveston ever again, as he did this time. 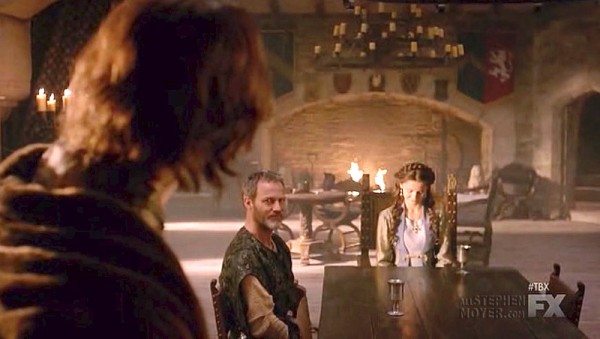 In the next scene, the Baroness and Maddox/Brattle meet in the chapel. They end up embracing. While they are in embrace, Jessamy, arrives to bring her husband his midday meal. Earlier in the episode, Annora warns Maddox/Brattle about Jessamy saying that she is is not far from insanity, and to beware of her, but now I’m pretty scared that she will be big trouble in the next episode. 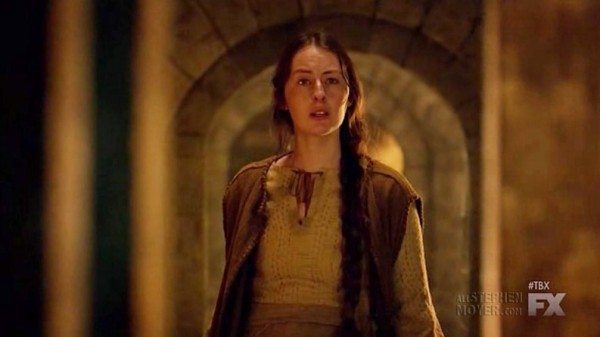