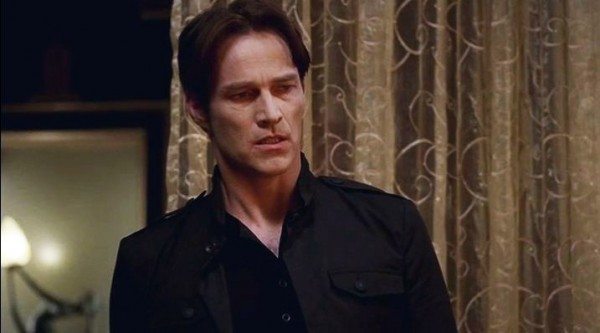 Recently, Michael McMillian was interviewed by TV Guide. During the interview, he answered a question relating to Bill Compton’s possible turn to the dark side, i.e., is he no longer a purveyor of mainstreaming. Michael answered as follows:

McMillian: It’s interesting because I think that Bill has always clearly been a mainstreamer at heart. As far as we know, the only people he’s really fed on are people that he’s been in a relationship with. I think everyone’s playing a game at this point. I think he keeps his cards close to his chest. Obviously, he was keeping a secret from Sookie for three seasons that he had been sent there by Sophie to spy on her originally. Whether or not Bill is falling into step with the Authority and the new agenda is a bit of a mystery in the second half of the season.

At the end of last week’s episode, we see Bill come up with a brilliant idea to defeat the main-streamers by blowing up True Blood factories. Eric looked as surprised as we were.

Certainly, we might find out something in tomorrow night’s episode, but we want to hear your opinion? Is Bill becoming a worshiper of Lilith or, does he remain the mainstreamer we all know and love and it is all an act in order to beat the Authority?

Please leave us a comment below with your opinion.