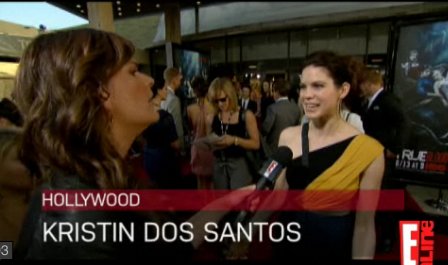 In a recent interview Kristin Dos Santos of E Online spoke to True Blood’s Mariana Klaveno about last night’s episode, specifically the last scene of ‘It Hurts Me Too’ with her and Stephen Moyer:

“[That scene] was actually the most shocking thing that I’ve ever read in a television script,” Mariana says. “My jaw dropped on the floor when I read it and thought, ‘Oh my god, I actually have to do that?!”

And that she did! But not without some words of wisdom from Alan Ball and the True Blood Powers That Be—well, sort of.

“[They said] ‘Here’s your script, pray that your parents will be okay when they watch this episode. They may not want to.’ It was a little uncomfortable, but we got through it.” Adds the actually very sweet Mariana: “I’m working with the best people from the writers to the producers to the other actors and at the end of the day, I’d rather be on a show that’s provocative and pushes the envelope than one that doesn’t.”

With all the hype around the smokin’ hot Eric (Alexander Skarsgård) and Sookie (Anna Paquin) this season, might Bill (Stephen Moyer) actually fall back in love with the evil one?! Mariana is coy, but says this: “You see some new dynamics in our relationship, and maybe a little bit more of the past—maybe some changes in our relationship as well.”

And for what it’s worth, I’m hearing we might actually—gasp!—like the character of Lorena by season’s end. There’s more to this lady than meets the eye.

“Everybody hates me!” Mariana tells me playfully. “I’ll take it as a compliment. I’m acting! I promise. It’s not me in real life, I promise. I’m actually, normally a nice person. I do love playing her. She’s a delicious character to play.”