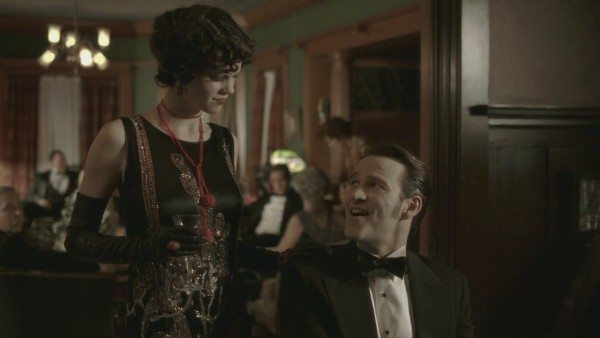 Mariana Klaveno, who plays Lorena, the vampire has recently been interviewed by IESB.net. Although she didn’t give anything away in the interview, she did reveal that viewers will get to see more sides to Lorena and they’ll be seeing Bill in a whole new light.

Here’s the part of the interview that pertains to her relationship with Bill (Stephen Moyer):

IESB: For those who might not be familiar with the series, can you talk about how your character fits into the overall story?

Mariana: My character is the vampire who makes Bill a vampire, and Bill is the main character in the show, back in 1863 or something, during the Civil War. He stumbles upon a cabin and my character is there, waiting for him, and she makes him a vampire. They have a history, which we showed a little bit of, for several decades. I think it’s about 70 years, or something. And then, we spend some time apart, and are brought back together in the modern day age and some mayhem ensues.

IESB: Are there any hints you can give about what viewers can expect from Season 3?

Mariana: It’s so hard because they don’t want us saying much, but I think viewers will get to see a whole different side to Bill and Lorena, especially with Bill. You get to see him in a much different light this season. There are a few scenes with Lorena where people will expect her to be far more sinister than she actually is, which will add some layers and dimensions to people’s view of her. Even though she is a monster in her own right, she’s not as monstrous as you think. She even has pity in some scenes that I’m hoping are very surprising to people. And, vampire Bill is in a whole new light in Season 3.

IESB: Are you going to be working with more of the actors in Season 3, or are your scenes still mostly with Bill?

Mariana: I’ve worked with some new characters, but obviously a lot of this season, Lorena is with Bill. As far as working with the Bon Temps community, alas I do not. It’s always been a fantasy of mine that Lorena shows up at Merlotte’s and picks up a shift, or goes shopping with Lafayette (Nelsan Ellis), or something fun like that, but no. So far, it’s mostly in the vampire world.

IESB: What’s it been like to work with Stephen Moyer? How is he as an actor?

Mariana: He is absolutely wonderful. He’s so funny and so smart. He is the most technically superior actor I’ve ever worked with. He knows more about camera angles, lighting and lenses, and he knows how to block a scene better than anyone. I just try to get out of his way and let him do his thing, and then learn as much as I can, whenever I work with him. He’s also so generous and considerate, and he’s always worried about the other person, in terms of our scenes, which involve a lot of stunts and crazy stuff. His first concern is always if I’m okay and if there’s anything he can do to make it easier for me. He’s just a wonderful, giving, funny guy and he’s great.

To read the rest of the interview, click here.