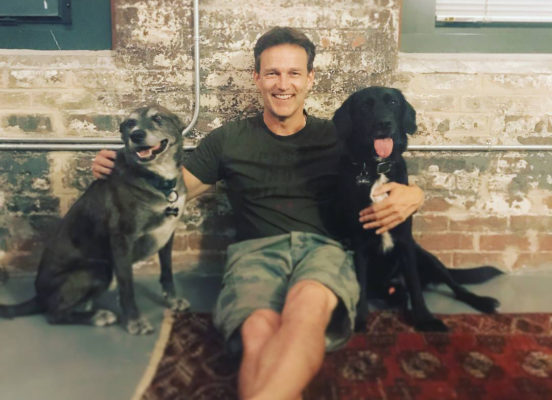 We’re happy to report that Little Blue, Banjo and Dave have made it to Atlanta thanks to Steve’s friend Mark who shepherded them, with great care, across the country from Los Angeles.

As most of the Stephen Moyer fans know, Steve is currently filming his new series, The Gifted in the southern city and will be there for a few months. Last year Steve had his truck shipped to North Carolina where he filmed his series, Shots Fired, so it’s not a surprise that he wanted to have the truck with him again.  Now, he will have the added fun of having his pups with him.

When they arrived in Atlanta they met up with Steve and took a photo to mark the reunion (see the photo below).

Mark sure had a great adventure and we loved following him all the way.  Along the way, he met up with some relatives, a good samaritan who helped him when he locked himself out of the truck and much more. Go to Mark’s Instagram account to see all the photos he shared.

THANKS AGAIN MARK for sharing such a wonderful experience with the fans!  By the way, you took some pretty awesome photos, too! I have personally dreamed of driving across the country and don’t think I’ll ever really get the opportunity, so it was really fun following your daily adventures.  What a treat it’s been! ~lynn