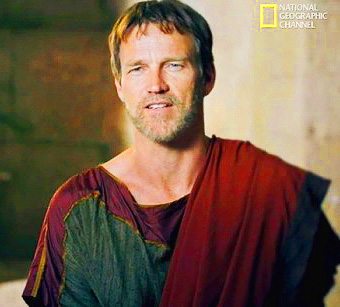 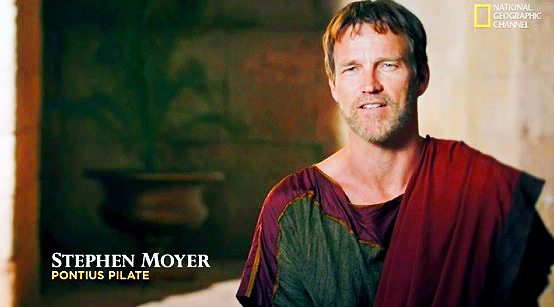 Since Stephen Moyer is playing Pontius Pilate in the upcoming 3 hour miniseries, “Killing Jesus,” I thought it would be helpful to learn more about the man who is said to have condemned Jesus to the cross and share it with his fans.

Whether you are a follower of Christianity or not, the story is fascinating and learning more about why Pilate made the decisions he did and what the circumstances were that led him to make those decisions, help us to understand what we will see when the program airs on March 29.

Below are some excerpts from the Pontius Pilate Wikipedia page that provides some insights about the man.

Pontius Pilate was the fifth prefect of the Roman province of Judaea from AD 26–36. He served under Emperor Tiberius, and is best known from the biblical account of the trial and crucifixion of Jesus.

From various sources, it appears that Pilate was an equestrian of the Pontii family, and succeeded Valerius Gratus as prefect of Judaea in AD 26. Once in his post he offended the religious sensibilities of his subjects, leading to harsh criticism from Philo, and many decades later, Josephus. According to Josephus c. AD 93, Pilate was ordered back to Rome after harshly suppressing a Samaritan uprising, arriving just after the death of Tiberius which occurred on 16 March in AD 37. He was replaced by Marcellus.

In all gospel accounts Pilate lobbies for Jesus to be spared his eventual fate of execution, and acquiesces only when the crowd refused to relent. He thus seeks to avoid personal responsibility for the death of Jesus. In the Gospel of Matthew, Pilate washes his hands to show that he was not responsible for the execution of Jesus and reluctantly sends him to his death. The Gospel of Mark, depicting Jesus as innocent of plotting against the Roman Empire, portrays Pilate as relucant to execute Jesus. In the Gospel of Luke, Pilate not only agrees that Jesus did not conspire against Rome, but Herod Antipas, the Tetrarch of Galilee, also finds nothing treasonable in Jesus’ actions. In the Gospel of John, Pilate states “I find no guilt in him [Jesus],” and he asks the Jews if Jesus should be released from custody.

Scholars have long debated how to interpret Pilate’s portrayal in the sources. The significance of the Pilate Stone, an artifact discovered in 1961 that names Pontius Pilate, is similarly debated by scholars. Pilate is mentioned by name and rank in a document by the 1st century Roman historian, Tacitus,[13] and by 1st century Jewish-Roman historian Josephus. Beyond this, little is known of Pilate and there are no formal records of his birth or early life.

Eusebius, quoting early apocryphal accounts, stated that Pilate suffered misfortune in the reign of Caligula (AD 37–41), was exiled to Gaul and eventually killed himself there in Vienne. The 10th century historian Agapius of Hierapolis, in his Universal History, says that Pilate killed himself during the first year of Caligula’s reign, in AD 37/38.

There is an ancient tradition linking his birthplace with the small village of Bisenti, Samnite territory, in today’s Abruzzo region of Central Italy.There are ruins of a Roman house in Bisenti alleged to be the house of Pontius Pilate. There is also a tradition in Scotland that Pilate was born in Fortingall, a small village in the Perthshire Highlands. Other places such as Tarragona in Spain and Forchheim in Germany have been proposed as Pilate’s birthplace, but it is more likely that he was a Roman citizen, born in central Italy. Another legend places his death at Mount Pilatus, in Switzerland.

Watch the video below that describes Pilate further and also talks about his responsibilities regarding Jesus’ death.