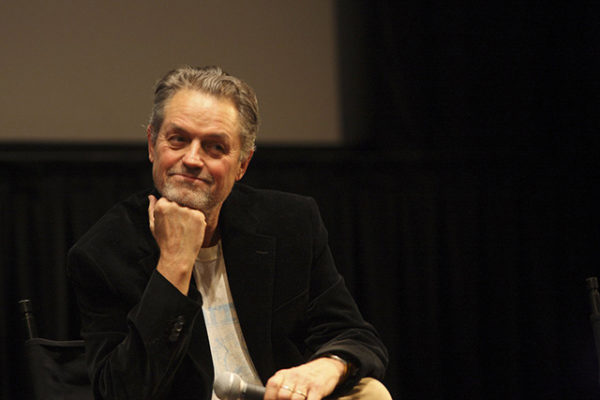 Jonathan Demme, the director of Philadelphia who died Wednesday morning at 73, took his Oscar-winning directing skills to the small screen, too.

The Oscar-winning director was a creative director, whose creative restlessness and wide-ranging curiosity about all facets of the human condition animated such diverse films as “Something Wild,” “Stop Making Sense,” “The Silence of the Lambs” and “Philadelphia,” 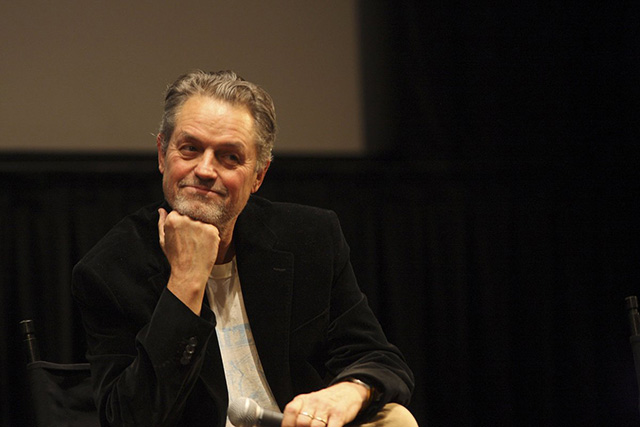 In a sad coincidence, a pivotal episode Demme recently directed of the Fox drama Shots Fired, titled “The Fire This Time,” is scheduled to air tonight at 8 p.m.

“We Mourn the passing of Jonathan Demme. He was a tremendous artist who shared our belief that art can change the world. He was a gift, and he made every one around him better.  He taught us to care a little bit more, believe a little bit more and listen a little bit more.  We will Miss him.” ~ Gina Prince-Blythwood and Reggis Rock Bythewood. 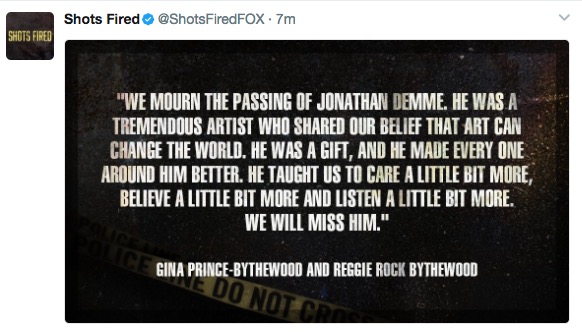 At a Fox press session in January, star Richard Dreyfuss singled out Demme’s episode as “killer.” (I’ve only seen the first six episodes, but this one is particularly memorable.) 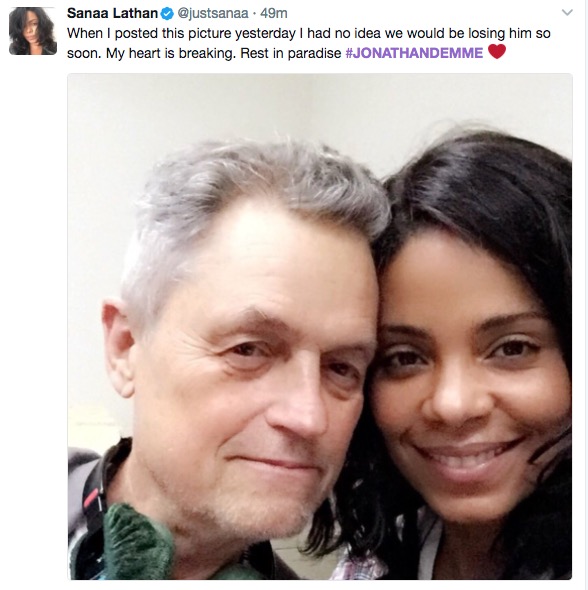 And several other members of the cast also tweeted about it, so far. See their tweets below:

Read more about Jonathan Demme and his career at the LA Times.

Shots Fired, which deals with the aftermath of a police-involved shooting, was created by filmmakers Reggie Rock Bythewood and Gina Prince-Bythewood (Love & Basketball, Beyond the Lights).

“This is a television show, but we think of it as a 10-hour film, and having that mentality, we wanted to go after feature directors,” said Prince-Bythewood, who directed two episodes. “And it was very exciting to be able to show them the script and tell them our vision of the show, and they wanted to come aboard.

“It was not a tough sell at all. In wanting feature directors, we also wanted people that would come in and not just think of it as, ‘I’m coming in for a week to do a TV episode and leaving.’ Everybody came in, wanted to do research, wanted to read the whole bible. Wanted to read all the character work and really dig in and really get great performances.”