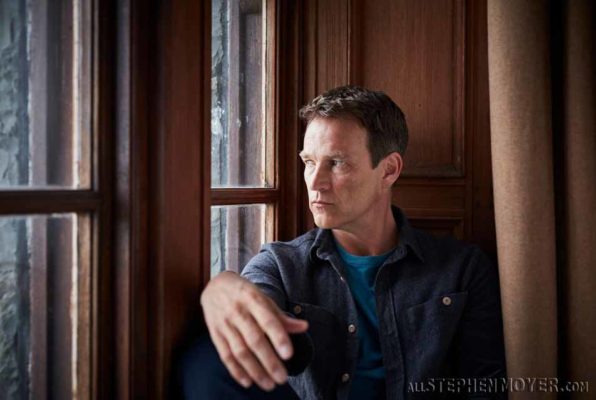 Below is a portion of an interview Stephen Moyer did with Metro News where he talks about going home and working in the UK again on Safe House. In part of the interview we have below, he discusses talking like Bill, his love of West Ham football, memories of his misspent Essex youth when growing up in Brentwood, and being able to use his English accent again.

Read part of the interview below:

Is it very different to working in the US?

No, love, there’s no difference at all — well, apart from the budget. In the US, they have the budget, so there’s more time. Here it’s much more of a kick-b******s scramble approach — there’s no hanging about. What I love about that is that it makes the creatives even more creative.

Is that the only difference?

Well, the US definitely has better catering. On True Blood they had amazing caterers — the only bloody trouble was, I wasn’t able to tuck into it. Because we had to get our kit off the whole time it was all protein shakes, healthy smoothies and brown rice for me.

Any hang-ups about the getting-the-kit-off bit? There was a lot of competition in that show…

It was a spectacularly buff show. There was a lot of ripped abs envy going on! I’m kidding — hang-ups or envy? No, not really… there’s a certain point when you know that this is a game you’re not going to win. I just caught up with the DVD box set and there were some serious bodies on there.

You’ve spent so long starring in the US, do people mistake you for being American?

Yes, all the time in the US. Even though I’ve done loads of interviews and all that, there are people who can’t believe it when I speak with an English accent. They think I’m putting it on, they can get quite annoyed.

Do people ask you to do Bill’s sexy voice?

God yes, I get ‘talk like Bill!’ all the time. It happens in New York a lot — it’s like you’re living on TV. They want you to say, ‘I’m going to bite your neck’ — in fact, I’ve been asked to bite all sorts thanks to Bill. The best bit is you can make a joke about anything while you’re doing the voice as long as you don’t let on to people that you’re acting. They think it’s real. Which means you can get away with being completely un-PC, which is fun.

Is it a relief to get back to your English accent for Safe House?

It is, because you get used to speaking a certain way. In Safe House we’ve rooted my character Tom, who’s an ex-cop who finds himself drawn back into an old case, in Essex, which is where I’m from. There’s a hint of Southend at one point.

As a lifelong West Ham fan, what’s your view about how it’s going at the Olympic stadium?

If we were playing better, nobody would be talking about the stadium. We haven’t taken well to it but all teams go through these stages. When the fans are feeling low, that plays into it too. When that stadium falls silent, it feels deathly quiet. It’s up to the fans to make some noise.

Ah yes, you’re a Brentwood boy. What do you make of the Essex image these days?

Of course it’s changed a lot since I grew up there. I was quite a political student in Brentwood, it was Thatcher’s Britain and I didn’t like what was happening — Essex kind of came to epitomise that culture. Not that I don’t love Essex, I really do. You go a few miles from Brentwood and you get to the country, to a lovely village like Finchingfield, so Essex is not wall-to-wall Towie. Though I have to admit that Towie is a brilliant conceit — I just wish they’d done it somewhere else.

By the way, we’ve looked up the word Towie for those outside the UK to learn something about Essex culture and here’s one of the Urban Dictionary’s definition:

Someone who loves ‘The Only Way Is Essex’. Usually a dumb girl trying to copy slightly famous dumber girls to become a braindead schlag. Some say the best kind of girl..

There were much more, shall we say, “specific and colorful” definitions at the Urban Dictionary, but we decided they weren’t appropriate to post here. However, if you want a laugh, go here to read them all.

To continue reading the rest of this interview go to Metro.news