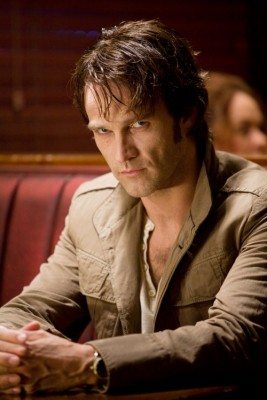 This article on Channel New Asia is called: Interview with a vampire. The reporter has Stephen Moyer in an interview room, so I expected an interview….. hate to disappoint you….. but we don’t get more than a quote.

It was the 13th day of a balmy January, on a non-descript Los Angeles studio lot that I first laid eyes on my first-ever vampire.

To be honest, I couldn’t tell you what he was talking about or whether it was funny. I simply wasn’t listening. He was my very first live (if you can even call them that) vampire and I was… mesmerised.

It didn’t matter that he was, in reality, a British Shakespearean actor masquerading as smouldering undead bloodsucker in True Blood, HBO’s hit vampire drama series. I was fascinated by his bloodstained fingernails and intoxicated by his lascivious dark character.

I was so intrigued that I wanted to learn everything about this 173-year-old vampire’s world — a darkly humorous other world set in the deep South where he’s in love with a telepathic human waitress named Sookie (played by Anna Paquin who won the Golden Globe for her role) and quenches his thirst (but not necessarily his desire) for bloodsucking with a newly-developed synthetic Japanese concoction called Tru Blood.

I had been bitten and sucked into the very vortex of a recently revived and currently uber trendy global phenomenon known as The Vampire Obsession.

Somehow, during this seemingly innocent set visit of Alan Ball’s satirical new world where vampires have “come out of the coffin” to co-exist with humans, this reporter had inexplicably become a fangbanger.

For the uninitiated, a fangbanger, according to www.urbandictionary.com, is a human who is addicted to vampires and the like, to the point of fanatic fervour. The term also refers to “men and women that hang around with vampires and enjoy being bitten”.

Vampire groupies, according to Charlaine Harris, author of The Southern Vampire Mysteries, the series True Blood is faithfully based on.

It has to be said that I certainly do not enjoy being bitten by anyone — vampire or otherwise. So what is the eternal allure of those nightwalkers that make them so hot? Is it their eternal youth? The constant sexual allusions?

As a genre, vampire tales are pretty long in the fang, dating as far back as the 1700s and coming a long way since Bram Stoker’s 19th century novel.

Every generation has had its own pain in the neck, from Bela Lugosi, to Anne Rice’s The Vampire Chronicles, to those deliciously evil 80s teen vamps in Lost Boys, to the smart and sassy genre-defying TV series Buffy the Vampire Slayer, right up to the recent mega-hyped frenzied spectacle of Twilight.

Indeed, vampire lore has remained in the foreground of pop-cultural consciousness. It has, over the years, morphed from the demonic, repressed Victorian sex fiend to this millennium’s most-eligible bachelor. Along with George Clooney, of course.

Perhaps the enduring popularity of vampires can be attributed to the fact that they are seen as allegories of what is happening in our own life.

And True Blood certainly has life’s allegories — prejudice, discrimination — within. It just depends on which way you read it.

Creator and producer Alan Ball (Oscar-winning writer of American Beauty and creator of the groundbreaking TV series Six Feet Under) told TODAY: “I don’t know how you can do a show with vampires and not have any sex in it. They are such a potent metaphors for sexuality,” said the 51-year-old, laughing.

“I feel that the show takes place amidst all the terrors of intimacy and physical intimacy, and that in a way, is part of the whole southern gothic thing… Sex and violence is a big part of this world. It’s a big pulpy crazy world.”

When questioned about the specific line in the show about “vampires coming out of the coffin”, Ball had this response: “I really don’t look at the vampires as a metaphor for gays in a very specific way. I mean, for me, part of the joy of this whole series is that it’s about vampires, and so we don’t have to be that serious about it.

“They totally work as a metaphor for gays, for people of color, in previous times in America, for anybody who is misunderstood, feared and hated for being different… But I think it’s a bigger metaphor, and at the same time, it’s also not a metaphor at all — it’s vampires.”

Australian Ryan Kwanten, who plays Sookie’s hot-bodied, womanizing and, often-naked brother Jason, agreed and loves that the show doesn’t take itself too seriously.

“There is definitely an element of comedy to it. And that campy-ness only adds on to the addictive nature of the show. Because you can relate to it more.”

Playing a character that despises the vampires but yet is intrigued enough to sleep with them at the same time, was a complex challenge. “(Jason) is not your conventional bigot. He comes from a place of innocence. There not a lot of concrete conviction to what he says. It’s almost like one of those inherited illogical thinking. I think we all know people like Jason who are resistant to change. The world is full of all types and that’s the beauty of it.”

But it’s Moyer who summed up what ultimately makes fangbangers everywhere swoon over vampires in the first place.

“The series turns the vampire stereotypes on its head and shows how different a vampire world could be. A world where a complex character like Bill is so unlike any other vampires because he’s got actually got morals. He’s an ethical man and he just wants to be a decent undead being. I think that’s a fantastic thing.”

Where has this man been all my life? Oh, that’s right — dead.