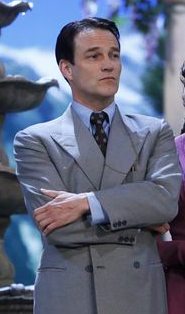 Stephen Moyer talked with Entertainment Weekly prior to the airing of the LIVE version of the Sound of Music.  In the interview, he talks about how he got the part, if he liked the film and what it’s like playing Captain Von Trapp and more.  Read the interview below.

EW: How did this come to you?
STEPHEN MOYER: Interestingly, I got the offer before. It came through at the end of the first week of rehearsals, so weird. I had just finished True Blood literally the week before. I was waiting on quite an interesting gig, and my agent rang me up and he said, “Hey, are you available for a minute for a chat?” I thought it was going to be something else completely and it was The Sound of Music Live! Not quite what I was expecting.

Were you a fan of the movie?
Absolutely. I don’t think there are very many people that aren’t, and that’s for good reason. It’s great. I get asked this question a lot about when was the first time that you saw it, how did you feel, what does it feel like walking into other people’s shoes, etc. But, you know, Julie Andrews wasn’t the first person to play it, neither was Christopher Plummer. This was a musical for six years that was extraordinarily successful before it became a movie — and that’s the version we’re doing. We live in a comparative society; people are going to compare. I’ve seen a couple of productions of this over the years and it’s just a brilliantly constructed piece of theater.
If we just look at it from the Captain’s point of view, what I was interested in, going back to the book, was that he is a conscientious objector. He’s a war hero who is a conscientious objector, which is kind of mad when you think about it. He morally stands up against something he doesn’t believe in. So, there’s that part of the story, which you kind of remember, but it’s not what you think of. Right at the bubbling heart of all of this is this man, this war hero, who lost his wife and is grieving and has been grieving for five years and he’s shut off every emotional tap. He won’t let the children listen to any music. There is not music in the house, there’s no dancing, there’s no fun at all. In fact, he doesn’t spend any time with them. He spends all his time in Vienna. He comes back and replaces the governess, and then goes back to Vienna again because he can’t be around these children because they remind him of his wife.

It’s deep stuff. One of the things that the musical director, David Chase, which I really love, is that we’re all used to saying “The Sound of Music.” It becomes a little glib phrase that we all remember and think of, but the whole show is about how music transforms people’s lives. It’s about this place where it’s shut off and when she brings music into this house, the sound of music, it opens everybody up. It opens up all these emotions, and I love that.

What’s been the biggest challenge of this so far?
I can’t think of anything at the moment. You know why? The reason I can’t answer that question — I’m not scared of answering. It’s because they gave us a proper rehearsal period.

[Producers] Neil Meron and Craig Zadan have done a brilliant job of doing it like a Broadway show. Literally two days ago, we started blocking on set. The camera boys are looking at it today. Tomorrow, the sound design starts. There will start being microphones everywhere so that we can hear each other. That’s going to change it all again. Then, next week, on Monday, the cameras start. The cameras start blocking where they’re going to be and that’s going to be a whole other…one of the things that has happened is that you get to the point where you’re, “Oh, we’re doing really good,” and then you go, “Oh Jesus, now we’ve got to do this and we’ve got to change the blocking because it doesn’t work for camera.” So, you have these little false moments of…but that’s like building a show. I think the thing that’s probably the most concerning would be that our preview is our first night, is our last night. I’m sure we’ll get loads of chances to run it, in costume, with sound, as if it were real. But without an audience, you don’t know where the laughs are, you don’t know when the end of a number ends.

I was with Hank Azaria on Saturday, who’s an old friend of mine, and Hank had done this for George Clooney [for 2000’s Fail Safe]. He said they were all terrified! And then it started and they were all great. They were like, “Oh my god, this is great!” Then there’s this commercial break. So, you’re all on a high, then you get to a commercial break and all the fear starts again. That’s going to be an interesting aspect of it.
Is that daunting at all to step into an iconic role? I asked Carrie the same thing.

Of course you did, it’s an important question. I think that, truthfully, for me, I’m a huge fan of Chris Plummer. We actually worked together on a film called Priest about four years ago but we didn’t have any scenes together. But I’m a massive fan and always have been. I was thinking about it yesterday because somebody asked me a similar question and afterwards I was thinking, “God, there’s a career I’d love to…” Because he did a bunch of theater, he did a bunch of Shakespeare; he did Hamlet at Elsinore Castle. He then did this. He built up this career — probably spent 25, 30 years trying to get rid of Von Trapp, truthfully — and then finally in the last 10 to 15 years did. But what a great career. He’s done everything and he’s respected and much loved. So I am a huge fan, but I can’t be Christopher Plummer. I’m not Christopher Plummer. It’s going to be different and consequently, I haven’t watched the movie because I think it would be sort of torturous to do that to yourself. I can just try to do the best I can do with it and try and tell the story as best I can. It’s a great piece.

How has it been working with Carrie because she’s definitely sort of the novice, in terms of acting? How’s that been?
Look, she came in totally prepared. I mean, I was doing affiliate tags with her yesterday and I was just sitting there watching her. She’s just a pro, man. She can sing the sh– out of it, obviously, goes without saying. But I hope there’s been moments when I’ve been able to help her. She’s very keen to learn and be as good as she can be, so she’s kind of open in that way that you would want. There are some things that she hasn’t done before, which I can hopefully help here. She was a great help to me. We were in the studio — we get on really well. We laugh a lot, she’s very funny. She’s a spunky girl and she’s quick.

Why should people tune in for this show? What are they going to get? Sell it to me!
They’re going to get the possibility of it all going wrong…live. We all love a car crash, you know? We’re all huge rubber-neckers [Laughs]. But what that also brings, is a kind of viscerality — if that’s a word – that it is really happening now. If there are little moments where it’s probably not as good as it was in the dress rehearsal that proves that it’s happening now. There’s very little like that in the world anymore. Everything is so slick and clean and we expect our entertainment to be this glossy thing. I’m really excited about the fact that it isn’t that and it’ll be what it will be on the night and that’s the only time it will ever be. And I think that’s exciting.
I really hope that this sort of spawns a tradition of live performance again because when I grew up, we used to watch this thing every Sunday called Sunday Night at the London Palladium. It was a variety show and it was live from the London Palladium every week on ITV. They’d cut to breaks and they’d come back and it would be a comic running it and there’s people coming on and signing, stupid little, you know, juggling acts and stuff. I love that sh–! I love it. I think that’s something that isn’t around anymore and we live in this world where everything is so immediate. I’m excited by it and I think it should be fun. If you’re tuning in to watch the movie, watch the movie, because this is not it. It’s going to be very different. We’re not in Vienna, do you know what I mean? We’re in Long Island in a shed [laughs]. It’s about seeing it for what it is and it is this amazing piece of work. Hopefully we’ll do it some justice.

You must be thrilled to show a different side to you for people who only know you as Bill from True Blood.
Yeah, and it’s been really fun singing, it’s been really fun — this is the first time in, I mean, years that I’ve used my own accent. Years. Feels a bit weird. Because I use an accent sometimes as a disguise. It’s another part of the costume in a way. So, getting used to hearing my own voice has been interesting. Yeah, just showing another side. I got into this business because I loved theater. It was all I ever wanted to do and this is a great kind amalgam of what I am now and what I used to be.