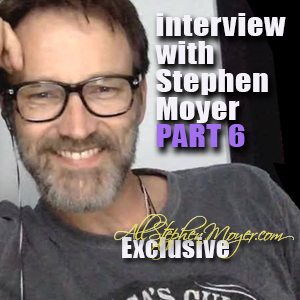 In Part 6 of the interview Stephen talks about social media, photography, shaving his head and he sends a big “thank you” to the followers of AllStephenMoyer.com and The Vault – TrueBlood-Online.com.

What a big surprise it was when Stephen and Anna ventured out into the world of social media earlier this year.

You and Anna finally found your way to Social Media….
“Yeah I know…. it f*cking took us years”, Steve says with a big grin on his face.

Through social media you get an immediate response to your work from fans and haters, how do you experience that?

“One of the reasons we didn’t become part of social media is because we are quite private people and so it felt like an intrusion that I don’t think we necessarily wanted to bring into our lives. But we were coming to the end of the show and we have our own company [CASM] and we have lots of exiting stuff going on and we wanted to be able to tell our audience. We kind of went ‘we have to do this’ and we can’t keep pretending that it’s not there. And the other interesting aspect of it of course is for me, I’m a photographer and I love photography. I thought about Instagram that it was just girls in the valley taking pictures of their Starbucks and when I finally got on there I loved it instantly. Everybody I follow there is a photographer or is somehow related to photography; and I love it even though I don’t get as much time to do it. In an alternative life, in another world all that I would be doing is taking photographs, really.”

“What we were both really surprised about when we did sign on was how immediate it is and the fact that you actually get to talk to people and you don’t have some conduit doing it for you; you’re not beholden on some reporter taking down your words and then f*cking them up. So there is actually immediacy to it that we both really like.”

Can we expect a book or calendar with your photos in the near future?

“Possibly. A nude calendar, Venice tramps nude. That would be good, wouldn’t it?” He jokes.
I am sure you could take some interesting photos in Venice, I reply.
“For a couple of dollars you can do anything in Venice,” Stephen smiles. “So yes, the answer is yes.”

Anna fulfilled a teenage dream by dying her hair purple. Can we expect something similar from you in the near future or did you do it all in your twenties?

“When I was growing this beard for ‘Concussion’ I didn’t expect there to be as much gray in it as there is”, Stephen says stroking the hair on his chin. “My hair isn’t quite as gray as the beard, but I am thinking about shaving it all off. But there is a bunch of sh*t I’d like to do, of course.”

“Yeah, a spider web, here”, Stephen moves his hands over his face imitating a web. “I’ve been to the tattoo parlour so many times from when I was 15/16, always drunk and always about to do it, but I never fulfilled it. But there is a couple of things that I will be getting done at some point.” 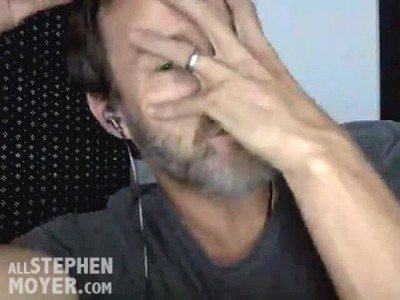 Did you hear they also put those implants under your skin, like horns or a donut?

To conclude the interview I asked Stephen a question sent in by our dear friend and fellow Moyerist WillKill4Bill.

Finish the sentence: Stephen Moyer is without a doubt…..

It turns out to be a difficult question and Steve gives it a lot of thought before answering: “The biggest bullsh*tter in Venice”. And he giggles. “Because I can tell a story. I am not somebody who really talks about myself unless I am absolutely pushed, so… I don’t know what to say to that.”

Stephen thanks the fans

The time has come to end our chat, the hour flew by way too fast and I could have easily continued for another couple of hours, but there is only so much you can ask in an hour. However, I was glad that I able to fit in all questions I had on my main list and even managed to slip in a couple of backup questions.

“Thank you so much”, Stephen says. “It was lovely to see you.”

“I’d love you to tell the people who go to AllStephenMoyer.com how grateful I have been over the years and to you and Lynn for doing so much amazing work and for ultimately even caring at all about it. It’s been an extraordinary run and the next phase is really exciting, I’ve turned a lot down over the last 6 months to try and find the right thing… the right fit in order to do the next 7 years. I really appreciate everybody who’s been following and watching your website and I appreciate you and Lynn for all the work you’ve done. Thank you.“

And he gives me and the fans a goodbye wave.