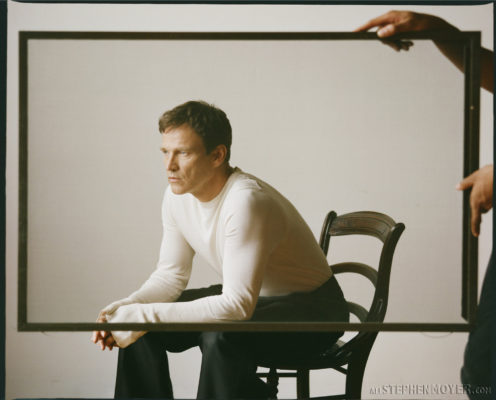 Earlier this morning, Stephen Moyer tweeted about a new photo shoot and interview he did recently with “The Laterals.” It’s been quite a while since we’ve seen a Stephen photoshoot that also included an interesting interview, so this is a special treat. Below is a screenshot of his tweet:

The photography is by Matt Priestley and there are just some fabulous photos included.

We’ve saved the photos in our Photo Gallery where you can always know where they are. ;-)

Below is a portion of the interview:

An attempt to figure out Stephen Moyer is like trying to put puzzle pieces together that simply don’t fit. A more apt overview reveals that his work is an anomaly, a compilation of characters that land all across the spectrum. Most of us know him as Vampire Bill Compton from True Blood, but his impeded rise to stardom includes everything from musical theatre to romantic comedy. This cognitive dissonance—the disconnect between Shakespeare and satire—has one single connective: you want him to bite your neck.

A true-to-heart boy from Essex, Stephen got his start in school plays and local drama societies. After acuminating his craft at the London Academy of Music and Dramatic Art, he spent the following years with a number of companies including the Royal Shakespeare Company and the Oxford Stage Company. His transition to film and television was evident, which earned him leading roles in a variety of genres such as romantic comedy, a mini-series, dramas, as well as a sitcom with a talking dog. However, there is no dispute Stephen Moyer is a craftsman whose command of artistry is fascinating to watch. Still, it wasn’t until his role as a vampire that appropriated him the notoriety.

For the entirety of seven seasons, Stephen played Bill Compton on True Blood, a Confederate soldier turned vampire. Remarkably, he became the protagonist’s love interest both on and off-screen. After having dated from the show’s pilot in 2007, Stephen married his co-star, Anna Paquin. Never shy about the show’s fantastically hypersexual scenes, the couple professes that working together was actually great for their marriage. With a number of films and television shows thereafter, Stephen finally exchanges his supernatural attributes for mortality. In his latest project The Gifted, Stephen plays Reed Strucker, an ordinary suburban father whose children discover their mutant abilities. In association with Marvel’s X-Men, Reed Strucker takes his family on the run to join an underground network of mutants to fight against a hostile government. Uniquely complex and provocative, his performance is as good as ever.

Stephen Moyer has played some fantastical characters from this world and beyond; and yet somehow, he always finds a way to make them more than human.

And here’s another excerpt, we couldn’t resist posting:

Aside from playing a vampire in True Blood, you were also attacked by vampires in the film Priest and turned into one in Ultraviolet. Since you are pretty much an expert when it comes to the “undead,” what is one piece of advice you would give a vampire?

Practice with your teeth—those who don’t look foolish.

Needless to say, True Blood has quite the cult following. What was it like having such a devoted fan base? Do you have any stories from Comic-Con you can share?

I’ve shared the crazy stories of signing boobs and such before but meeting fans who have your actual face tattooed on their body (uh, Tiffany?) is quite surreal (a couple of whom out there I have become quite close with).

Taking a departure from the world of vampires, your new series The Gifted tells a story about mutants based on Marvel’s X-Men. Tell us more about this project.

The Gifted is a Fox/Marvel show set in the X-Men Universe about a family that learns their children have the mutant gene. They have to give up everything to protect their children. They go on the run and join an underground mutant network.

It’s really about how these two families come together, the traditional nuclear one, and the collective family of mutant outcasts that we meet. The whole show is really about survival and how far you will go to protect your family.

Go to thelaterals.com to read the entire interview.