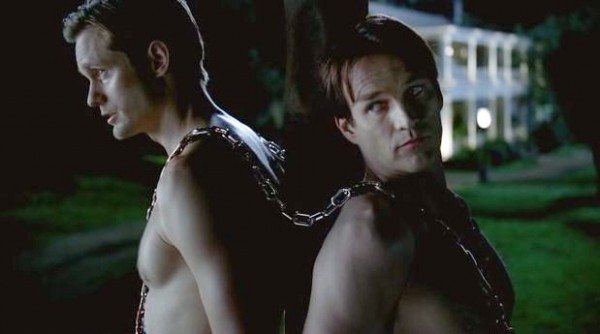 HBO has just finished airing the fourth season of True Blood and here we are already chomping at the bit for some Season 5 tidbits. Co-executive Producer, Raelle Tucker is ready to start sharing with us and we’ve posted all the juicy details of what she revealed on The Vault, which you can read here.

However, there was one of her quotes that really caught our “Bill Compton-centric” eye and we thought worthy of posting here.

Raelle Tucker teased, “The consequences of their (Bill and Eric) actions in the finale are going to chase them for a while next year.”

The mind starts to speculate what that could mean.

Maybe they will just become good friends and find that working together is the best thing or, maybe it will be a Thelma & Louise-style fugitive friendship — now that they’ve killed Nan Flanagan. Or, could there possibly be another potential “bromance?” First we had the Bill and Sam scene, could there now be relationship between Eric and Bill? I know I’m completely speculating here with just one statement to go on, but at this point anything can happen, so why not!

Whatever it ends up being, I’m betting that the return of Russell Edgington might have something to do with any bonding that takes place between the two and, unfortunately, we’ll have to wait nine monsths to find out.

What do you think about Bill and Eric as a team?  Do you like it or hate it?  Let us know your opinion by leaving a comment below.