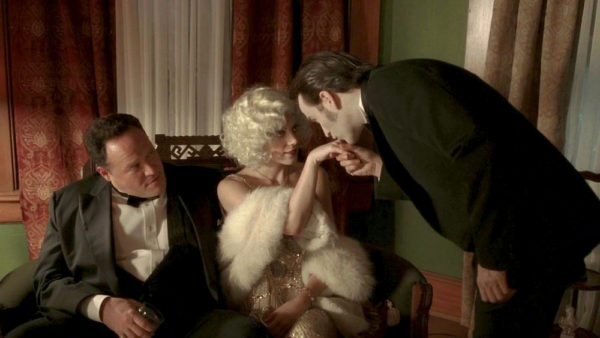 As 2009 winds down in a haze of repeats, Film.com took a look back at some of their favorite episodes of the year — limiting the choices to just one episode per series and they chose Hard Hearted Hannah as the best of True Blood.

I particularly liked this episode also since I’m always interested in seeing Bill’s past and it was one of the most ground breaking episodes with the wonderful writing by Brian Buckner and direction by Michael Lehmann. Stephen Moyer did an exceptional job of portraying “bloody” Bill in the 1920’s and his singing and playing the piano showed us how versatile he can be. Here’s what Film.com has to say as their reason for choosing this episode:

“Hard Hearted Hannah,” True Blood (July 26): There wasn’t as much of Eric as a good hour of True Blood typically has, but this was a pretty representative hour of the series, featuring a flashback that was the most violent scene in its history, as well as a whole lot of orgying going on, as Sam Merlotte learned his new girlfriend was less perfect for him than he had hoped.

Here’s more about the episode Hard Hearted Hannah that we have reported about previously. And here’s a video from the episode.