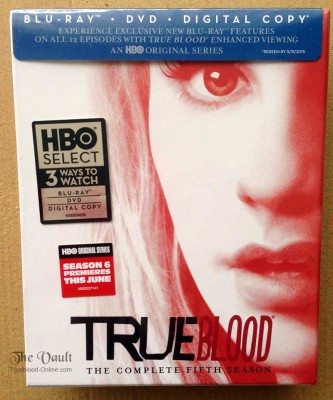 We’re thrilled that Season 6 will soon be here, and to get ourselves even more excited and prepared for the new season, we’ve decided to do a giveaway (which starts next Saturday, May 12) of the Season 5 Blu-Ray/DVD combo.

The True Blood’s Season 5 Blu-Ray/DVD combo (AVAILABLE FOR ALL REGIONS) won’t be out until later this month, and what a great time to review last season before for the new season premieres on June 16. The Blu-ray/DVD combo includes tons of never before seen Season 5 material that we think all the fans will love!

We’ve already gotten our hands on a copy of the Blu-ray/DVD combo before it’s release and will be giving it away to a lucky Truebie.

The giveaway will be launched next Saturday, May 12, so be sure to check back then to enter and get a chance to win this wonderful prize! See details below:

This giveaway will start on May 12, and go on for a week ending at 12pm P.S.T. on May 19. All you’ll have to do is to answer a question about Season 5 correctly in the comments below the Giveaway post here on  AllStephenMoyer.com or on The Vault: TrueBlood-Online.com. All those who comment on the Giveaway post and answer correctly will be entered for a chance to win the Blu-ray/DVD prize. We’ll then choose a person at random from the correct answers and will notify the winner.

To get you interested in participating, check out what this fabulous Blu-ray/DVD combo offers:

The set includes the full 12-episode season, along with extensive bonus materials such as exclusive interviews and never-before-seen content with three ways to watch, Blu-ray with DVD and Digital Copyand Digital Download.

True Blood Episode Six: Autopsy: Join the cast and crew as they dissect the major events of episode six and provide an in-depth, behind-the-scenes look at how True Blood is made.
Authority Confessionals: Learn more about the mysterious institution known as The Authority, from Nora, Kibwe, Rosalyn, Salome, Steve and Russell.
Enhanced Viewing:

Character Bios, Vampire Histories and Hints/FYIs: Get even more background on favorite characters, trivia facts as well as show hints and clues.
Flashback/Flash Forward: Move through time in the world of Bon Temps. Flashback to relive pivotal moments or Flash Forward to reveal the significance of a certain scene.
True Blood Lines: Uncover secrets from relationships past and present in this engaging, fully interactive “re-Vamped” guide and archive.

Inside the Episodes: Get the backstories on each episode with revealing interviews from the show writers.
Audio Commentaries: five commentaries with cast and crew including creator and executive producer Alan Ball, Anna Paquin, Stephen Moyer, Denis O’Hare, Carrie Preston and many more!
Previews & Recaps