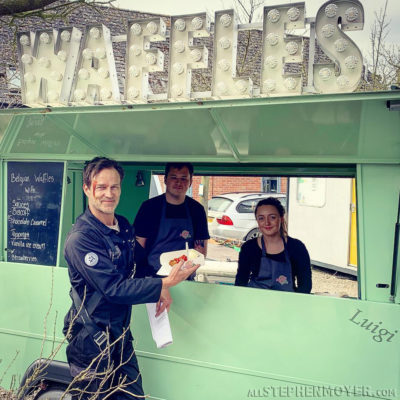 A couple of hours ago, Stephen Moyer posted a photo of himself getting waffles on the set of the movie G-Loc that he is filming in York, in the UK. We don’t know too much about the film except that it’s a sci-fi space film and, as Steve says in his post, he’s already 2/3 completed his filming. In the photo he is helping to advertise the concession stand on the lot.

Here’s what he has to say: 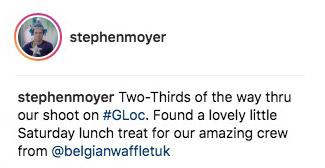 and below is the photo where he is helping to advertise the concession stand on the lot.

We’re assuming that there might be some trouble on board the spaceship as Steve has a streak of blood on his face.  I love a man in uniform, don’t you?

Here’s another photo of the cast and crew from filming courtesy of the cameraman on the film, George Burt, filmmaker

According to IMDB.com synopsis for G-Loc is as follows:

The story of G-Loc is about Bran Marshall, a young man who has fled from Earth through The Gate to find a new home on Rhea. But the early human settlers of Rhea have decided that they will no longer accept refugees from Earth, which sparks an adventure of discovery as Bran is forced to team up with a Rhean woman named Ohsha Rainer and stop her ship from killing thousands of Earth Refugees. Along the way they might just become the best hope that the next generation of mankind has to co-exist with itself.