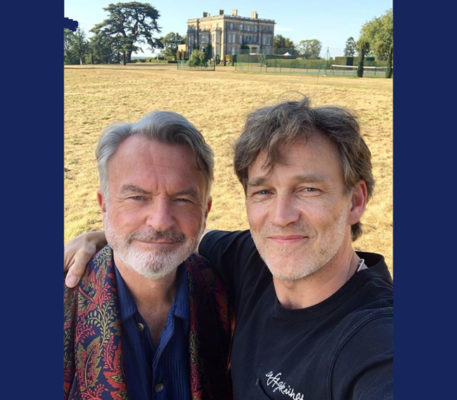 As we previously learned, a few months ago, CASM’s series, Flack has been renewed for a second season. Additionally, we see that filming for Season 2 has begun. Several pics and more that have been posted on social media by the show’s creators Stephen Moyer, Anna Paquin, and Cerise Larkin. Stephen Moyer is slated to direct two of the Season 2 episodes.

Below are photos from one of Season 2’s locations.  These photos were taken outside Hedsor House & Park which is a stunning Georgian mansion, with over 100 acres of private parkland, a short distance from the London.

As per the photo above, Sam Neill and Anna Paquin​ are back working together, after a 26-year break between their last project, The Piano. Back then, Paquin was aged 11 years old and won an Academy Award for her big-screen debut, playing child immigrant Flora McGrath. Neill played McGrath’s stepfather, Alisdair Stewart, in Jane Campion’s highly acclaimed film about early Pākehā settlers in New Zealand. Fast forward to 2019, and Neill is back working with Paquin, who is now the star of a new American TV series, Flack.

“All these years later, here we are. She’s a really terrific actor, a mum, an ex-vampire, the list is very long. I was so pleased to be around her again. And this time, he was my boss. Quite literally,” he said.

Below is a photo of Sophie Okenado with Sam Neill who also stars in the show with Anna Paquin.

We can’t wait for more to appear and look forward to a great Season 2 for Flack.

If you have yet to see Season 1 of Flack, click below to watch it online or buy the DVD.