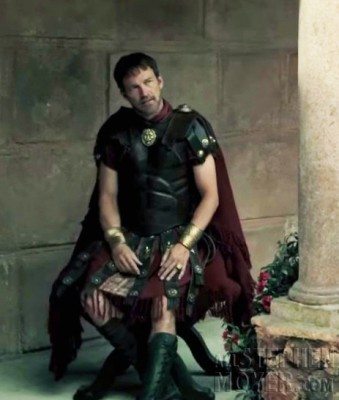 When Shadaliza spoke with Stephen Moyer in her Exclusive Interview last fall, one of the topics they discussed was his upcoming mini-series, “Killing Jesus.”

Stephen explained what it was like filming in Ouarzazate, Morocco and the fact that there were several “Jesus” related productions filming at the same time. He further mentioned laughingly, that because of it, there were at least “36 disciples around the pool at any one time.”

Below is more from Stephen and his friend Rufus Sewel about meeting up with old friends and the joint filming of two “Jesus” productions.

Though both productions are about Jesus, they take different approaches. “Killing Jesus” is Bill O’Reilly’s analysis of the time leading up to the crucifixion; “AD” focuses on what happens after.

Stephen Moyer, who plays Pontius Pilate,” said he was delighted when, after traveling 31 hours, he ran into Rufus Sewell.

“Rufus is an old mate of mine,” Moyer says. “One of my best friends is on one of the other jobs, ‘The Jesus Code.’ Michael Higgs — he’s playing Joseph of Arimathea. All of us were at the Royal Shakespeare Company 23 years ago and now we all around the pool sipping cocktails. It’s like being in Soho in London.”

Rufus Sewel plays Caiaphas and he said of the productions:

“Any time you’re around the pool, there is a mix of three Jesuses, a brace of Mary Magdalenes and disciples fighting over the condiments.”

“At any point, you see 36 disciples by the pool,” Moyers says.