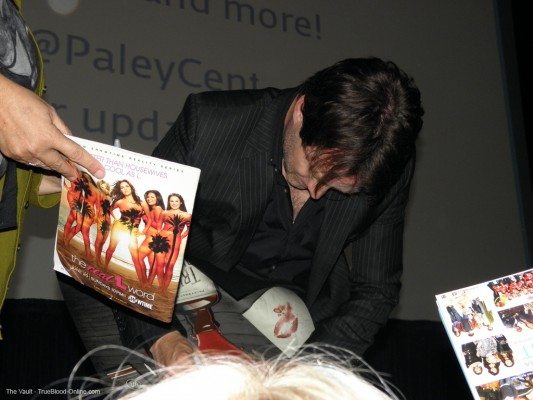 Below is a Billsbabes Fan experience Paley Fest 2011 who gives her account after attending the PaleyFest 2011 on Saturday night, March 5, 2011 in Beverly Hills, CA. We all know her as “ThelLou” who makes all the wonderful videos in the Fan Creations section here. Here’s her story: 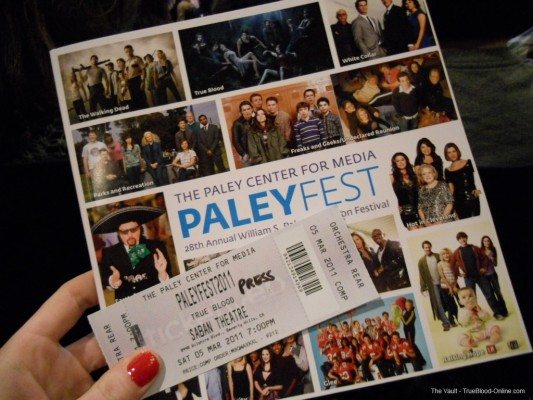 If I had to describe “True Blood” at PaleyFest in a word? I’d have to use two – FREAKING AWESOME!! Wow, what a day. It started early when we were locked out of the apartment unexpectedly, but thankfully the day improved from there. We arrived at the beautiful Saban Theatre in Beverly Hills a little later than planned, but we were still early enough to get a great place in line with other diehard fans.

I have to say, waiting in line with a bunch of Billsbabes (and yes, we even socialized with the Eric folks and everyone was fabulously nice) was a pretty darn great way to spend a Saturday! We had beautiful weather – sunny, but just a little cool in the shade. We camped out on blankets and folding chairs, took turns picking up food and taking potty breaks, and of course had plenty of time to discuss our favorite show, “True Blood.”

Time flew by, and before we knew it, dusk was upon us, the theatre was lit beautifully, and it was time to be allowed inside for the event! There was so much excitement in the air, we just knew a wonderful time was going to be had by all. Lynn, Marshaa, Anita and I all managed to get third-row center seats, which was pretty kick-ass. We had a great view of the entire stage! After a quick introduction by a Paley rep, we got to see a nice little show recap including all of the main characters – Sookie screams a lot, Bill doesn’t play well with other vampires, Jason…is Jason, and we love him for it. It was a very nice clip package that I hope will be available at the HBO site soon if it isn’t already.

We also got a sneak peek clip for season 4. It wasn’t very spoilery at all, but I will say we got to see Pam, Jessica and Hoyt doing their thing – the Pam one-liners are definitely still zinging left and right just as they always have! 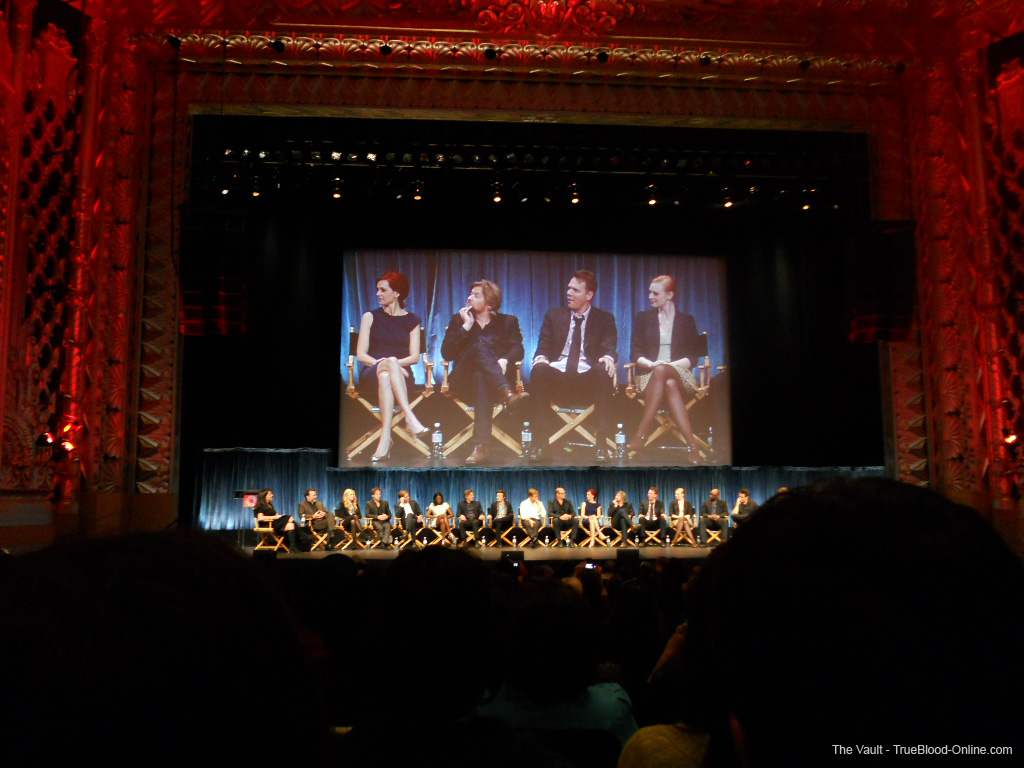 The moderator for the panel was from TV Guide, and before we knew it all of our favorite TB stars were taking the stage! All of the main actors were there, as well as many of the supporting players, plus even the man himself, Alan Ball. I think if you’re a fan of the show, you had to be pleased with how many came out to support their fave job/show.

The panel was so much fun. This cast has chemistry and camaraderie in spades – they all seem to love each other, and everyone wants to work with everyone else! A fun question for all was about memorable fan encounters.

Joe M. was asked to lick a fan since werewolf saliva has healing powers. Thankfully, security saved him from that request

Chris Bauer was excited that a fan approached him, but it turns out the stranger only wanted to point out the bird poop on him.

Todd Lowe was asked to help a friend move, solely because the friend thought Terry’s pick-up truck in the show belonged to Todd. Todd did help him, though sadly without the aid of said truck.

Jim Parrack was asked to school a recent parolee on the finer points of being like Hoyt Fortenberry.

Sam and Rutina were both asked to be bitten by fans. Rutina claims they allowed the bites to happen, but Sam has blocked it out and has no recollection. He just took her word for it.

Alex once received a request in the mail to marry a woman’s daughter. I’m pretty sure he turned her down, but then he flashed a ring so who knows?

Stephen mentioned again all of the dogs he’s encountered named Sookie. He’s also been asked to call various wives/girlfriends on the phone with the hopeful result of getting their significant others “so laid.” Apparently this works well, and could be a side business should he decide to give up this whole acting thing.

Anna thinks it is cute that women approach her pretending to want her autograph, when what they really want to do is meet her husband. I’m pretty sure Mr. Moyer blushed at this, and it was a very cute moment.

Alan echoed Stephen’s comment, and said he’s been thanked so many times for improving sex lives around the world via the sexiness of “True Blood.”

After some audience questions, the panel quickly ended and the mad rush to the stage began. I think we’re all a little skinnier and taller now that we’ve been squashed into oblivion, and I got very well acquainted with a gentleman who gave me a forced lap dance when the crowd got to be way too overwhelming. Sir, I’m pretty sure you owe me at least dinner and drinks, or I owe you some singles down the waistband, so give me a call if you’d like to pursue that.

Stephen signing autographs on stage for the fans.

But you know what? It was so. worth. it. Not only did I get to have Stephen sign his lovely Details magazine cover, but he took a pic with me! What an absolute sweetheart of a man, and so attentive to the fans. He walked up and down the stage to sign for as many people as possible. Quite a few of the actors stayed a long while, and when we finally got out of the mad throng, the only signers remaining on stage were Stephen, Sam, Alex and Joe. Not only are they our resident hotties, they love the fans, too! What total sweethearts, all of them.

I bought a TB Paley poster on my way out to grab some much-needed oxygen, and then we were off to the back of the building to see if we could get more pics of our fave stars departing. I heard that several of the cast came out back to sign for fans including Marshall Allman, Kristin Bauer, Stephen Moyer and Anna Paquin. Yes, I was lucky enough to see Stephen and Anna again! The stars of the show are the best at taking care of the fans – how awesome is that? They kept signing and taking pictures even though they were constantly encouraged by reps and security to leave. Even though I had already taken the time to meet with Stephen inside, I decided to give him a little more attention and take another pic with him. He thanked me profusely for flying across the country to attend the event. Stephen said the TB fans are absolutely the best. I also got a pic with Anna and had them both sign last season’s Bill/Sookie TVG cover. Niiiiiice! 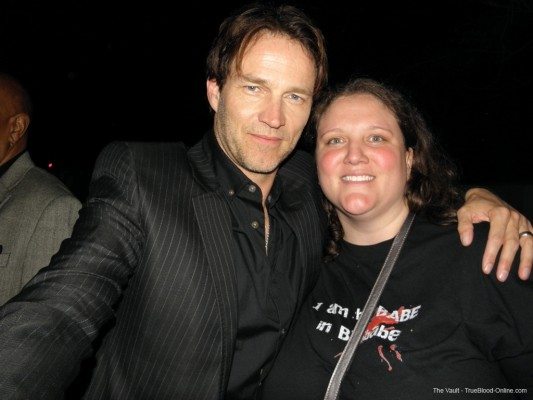 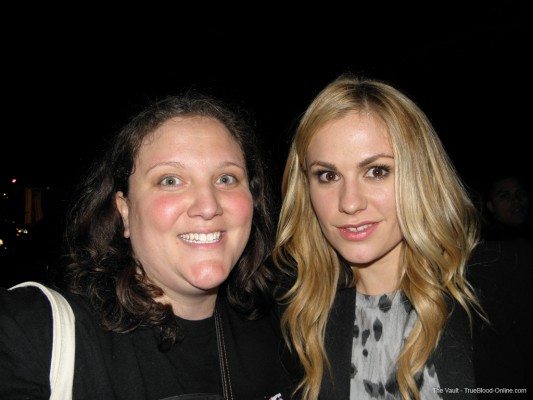 Photos of me with Steve and Anna

Sadly, once Stephen and Anna left the night was officially over. What an experience! I can’t thank all of the stars, the Billsbabes and especially Lynn enough for such a wonderful time. I’d love to do it again next year!