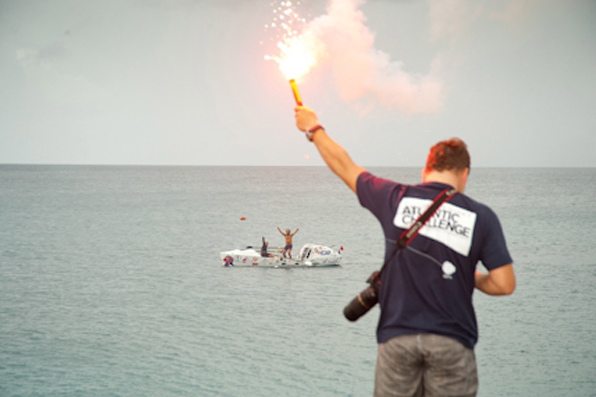 It took Bertie and James 63 Days 16 Hours 8 Minutes to cross the Atlantic Ocean from La Gomera to Barbados. They suffered every set back imaginable from broken oars to capsizing, but they made it. Raising over £365,000 ($579,000) for Facing The World.

CONGRATULATIONS !!! You are true heroes.

The latest update of what Stephen Moyer’s fans have raised is $21,000. Thank you all for your generosity!

Stephen really wanted to be in Barbados to welcome his friends but unfortunately, his work schedule did not permit it.

Bertie and James also received the congratulations from Queen Elizabeth.  Here is the text from the letter:

“The Queen has asked me to send her congratulations to Robert Portal and James Cash on the successful completion of their trip across the Atlantic by rowing boat yesterday. Her Majesty was pleased to hear of their achievement and of the money, they have raised to support the charity “Facing The World”.

The Queen has further directed me to send her good wishes to Mr. Portal and Mr. Cash, to which I would like to add my own.

Please will you convey this message to them.

As a follow up Her Majesty also said to her Private Secretary that she remembered her Coronation where she was congratulating Hilary and Tensing and it, in her Diamond year, felt similar congratulating two more explorers.

Bertie and James’ reaction was: “We are all over the moon.”

Below are some photos of the men after they landed!