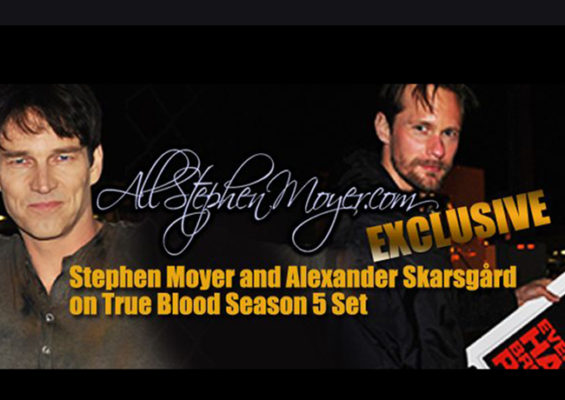 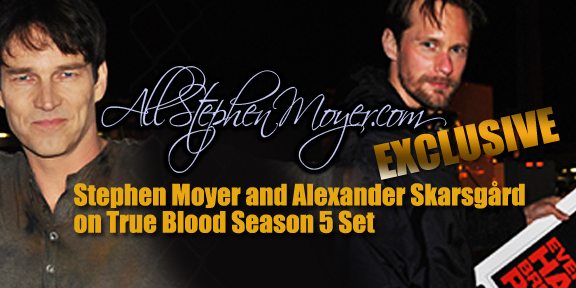 Last night, two friends and I drove to the set of the night’s shooting of True Blood and we were lucky enough to see our favorite vampires, Alexander Skarsgård (Eric Northman) and Stephen Moyer (Bill Compton).  Both men were so wonderfully nice to us and we are very grateful for the attention. Read our story below.

It was a cold and dark night and we had no idea who might be at the set, but we decided to go because, since it was a night shoot, we thought it might include our favorite vampires, Alexander Skarsgård and Stephen Moyer.  For most of the night, we were cold and sad because it was an extremely closed set and we feared we wouldn’t get a chance to even know if they were there or, if they were there, whether we would even get an opportunity to see them or not.

We arrived to find an extremely industrial, unfriendly site at about 6 pm. We drove around looking for sightings of our vampires or to see what might be happening. We knew early on that we probably wouldn’t see any filming because the security was too tight. We spoke to a guard and were permitted to see part of the shooting, but only from far away. I won’t give away any spoilers here guys, because we really didn’t go there to get any secrets, but I can tell you what we saw included a big “Kaboom“.  After that, at about 10:30 or so,  we walked back to our car trying to decide what else to do since we weren’t permitted to get close enough to see any filming that was taking place properly.

It was late now, after 11 pm and we had been sitting in our car for a while, which was parked by the stars trailers trying to decide what to do next. We sat debating whether to leave or stay and just then, Christy spotted Alexander Skarsgård coming out of his trailer. OMG, we all ran out of her car and went up to the fence calling to him. He immediately saw us and came right over. Christy had a poster from Straw Dogs that she wanted Alex to sign and he was more than willing to do so. However, there was about a 15-foot high fence between them. She asked him if he wouldn’t mind walking down to the catering trailer where she knew there was a gate where she could slide the poster through. We ran down there and met Alex. Christy slid her poster in the slit between the gate and the fence, but luck would have it, the gate was unlocked so we opened it and we, therefore, were able to talk to him and get photos. Alex was so nice and happily signed the poster in Swedish writing, Kram Christy! (Hugs Christy!). Then, they asked if he would pose for a photo and he gladly did.

We all noticed that Alex, our vampire Sheriff, had a beard.  We all thought that was rather strange because we all know that vampires can’t “grow hair”, or can they?  Are we to see a bearded Eric in Season 5?

I managed to film most of this, see photos and my video below. 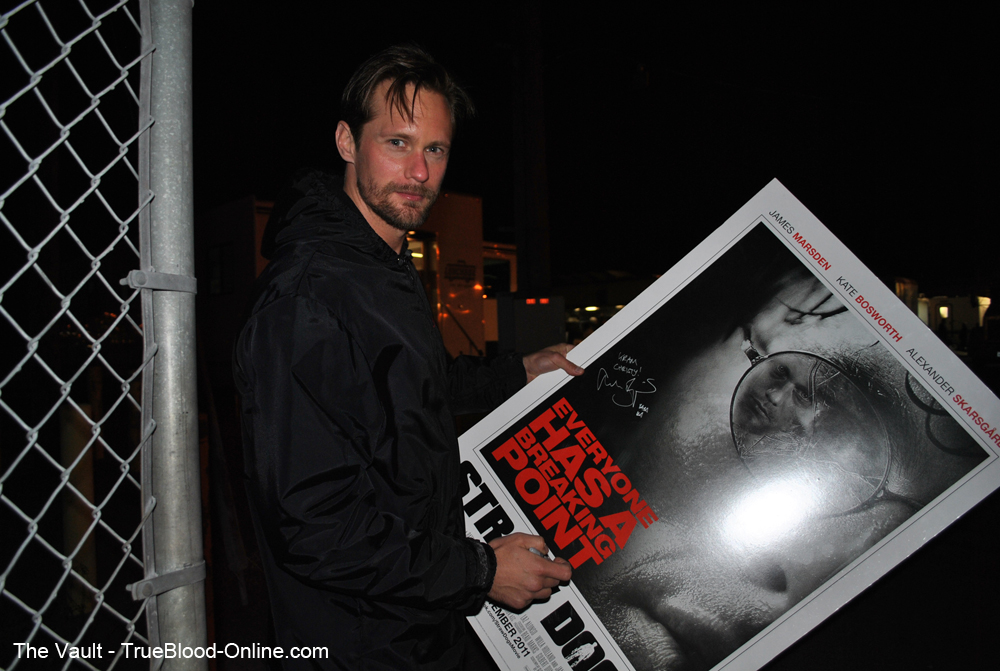 Then, Alex left to get his dinner and go back to his trailer.  We walked back to the car with Christy and M’Lou very jubilant that they had seen Alex, gotten autographs, and photos.

One vampire down, but still one to go.  If Alex was on set, Stephen must also be there. I decided that drastic measures were necessary as it was now getting pretty late. I decided to break my rule and took a chance and texted Stephen saying that we were on the set and had just seen Alex. I asked if he was on the set, too and, if so, I’d love to say “hi”.  If not, we wouldn’t stay.  He immediately wrote back and in no time we were back at the gate seeing Stephen Moyer live in a Henley, no less.

Stephen chatted with us, posed for photos and signed a True Blood script for Christy. He and I spoke about Bertie and James who are the two men of Facing the Atlantic, one of our charities. Stephen’s best friend, Bertie Portal and his friend, James Cash took off earlier this week for their two-man row across the Atlantic Ocean, but after two days out they had to be towed back to the island to repair their boat’s broken power supply.  We discussed that they were back in La Gomera, but that they were hopeful that once the boat was repaired to set off again soon. This morning, we learned from them that indeed they will start again tomorrow morning. Read more about it here. By this time, the makeup people were calling Stephen so he had to leave, or I think he might have stayed and chatted even longer.

Below are photos of Christy and M’lou with Steve. 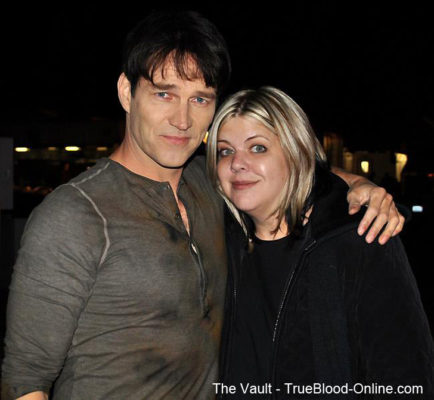 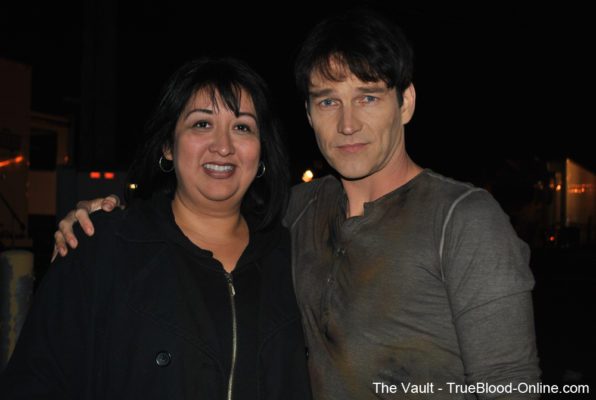 I joke all the time about not being able to take a good photo and so after Christy realized that my eyes were closed in the first photo she took of me with Steve, we posed for a second one. This time both she and M’Lou were shouting to me, “keep your eyes open” and I sure did. So, now I have one photo with Stephen where my eyes are closed and one where I look all “bug-eyed.” However, I like the photos and we all had a good laugh about it. 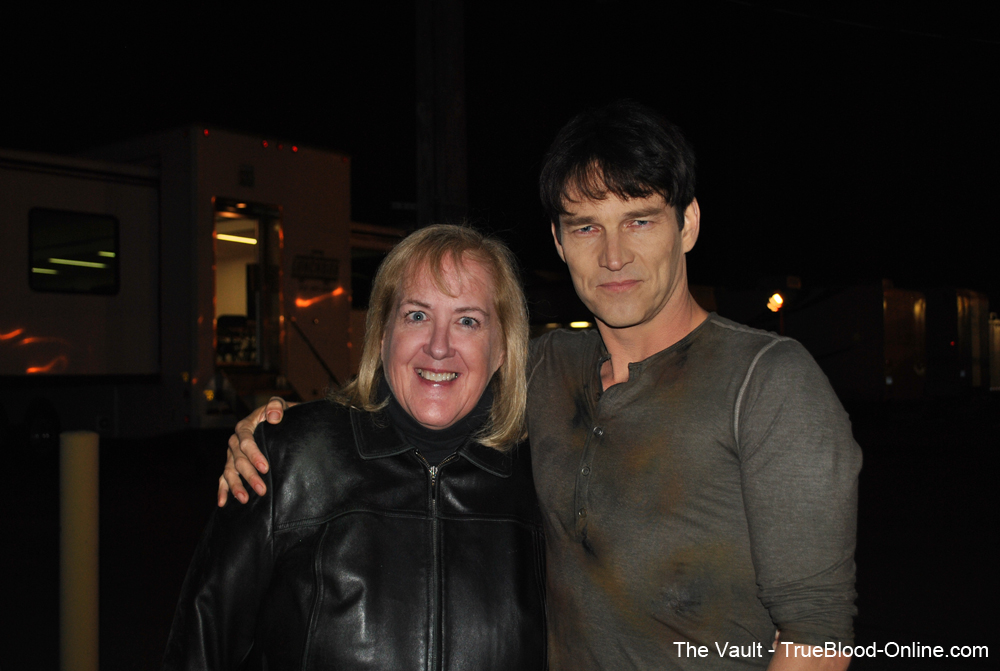 So, as he left, we floated (and I mean floated) back to our car. By then, it was very late and we decided it was time to go. We were all so excited and thrilled by our adventure and went out to eat a well-deserved meal before heading home late into the night.

My only regret is that I didn’t get a photo with Alex, but I know I will sometime!

A huge thank you to Alex and Steve for being so gracious and kind by spending time with us. I’ve said it before, and I’ll say it again, the True Blood people are simply awesome and I can’t wait for Season 5!

Thanks to Christy and M’Lou for sharing their photos and allowing me to include them in my story.