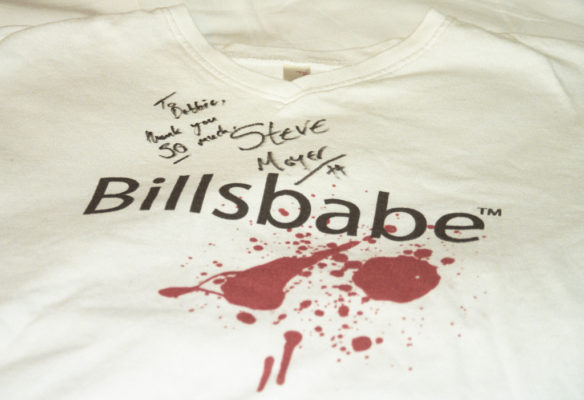 Right after the Paley Fest last Monday night, three of the Billsbabes who were present at the event dashed off to the Arclight bathroom to exchange their “Billsbabe” t-shirt for an outfit more appropriate for the attendance of a movie premiere. A taxi brought them to the theatre where the premiere screening of Anna Paquin’s latest movie “The Courageous Heart Of Irena Sendler” was taking place.

The Vault’s special reporter Gretchen attended the whole event. Her full report can be found here.

Billsbabe Debbie met Anna Paquin, Stephen Moyer and Sam Trammell and had a chat with them.

Stephen took this opportunity to thank the Billsbabes for their on-going support for the Brentwood Theatre in his native Essex. He became Patron of the theatre in 2007 and supports their campaign to help fund the completion of the backstage facilities renovations.
When Debra asked Steve to sign her Billsbabe t-shirt, he replied “Dahling, I would love to sign your shirt.”

Debbie handed him the shirt and sharpie. He then curiously took a plate from the table next to them. She asked him what the plate was for and he responded “Dahling, I want to sign the shirt properly“.

He slipped the shirt over the plate so the sharpie ink wouldn’t bleed through to the other side. While Steve was over at an empty table to sign the shirt, Anna told Debbie that one of our Billsbabes had given Carrie Preston a Billsbabe shirt (The Vault’s reporter Janet gave Carrie Preston a t-shirt at the Macon Film Festival earlier this year). Carrie subsequently gave the shirt to Anna and she revealed that she had worn it a couple of times. Debbie told Anna that she was the “REAL Billsbabe” …Anna agreed!

The original Billsbabe shirt and more t-shirts are available in our Billsbabe’s Shoppe.

With every item purchased a small charitable donation will be made to the Brentwood Theatre in Essex, United Kingdom.