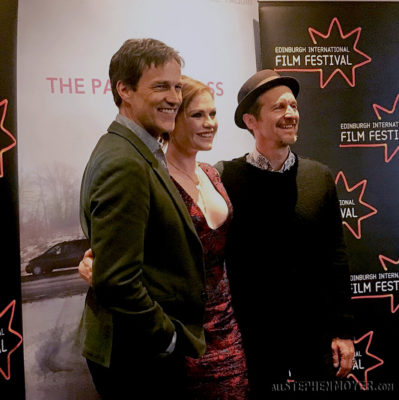 While attending the Edinburgh International Film Festival The Parting Glass creative trio, Anna Paquin, Stephen Moyer of CASM Films and Denis O’Hare, the films writer sat down with Christopher O’Keeffe to discuss the making of The Parting Glass, it’s difficult subject matter and the difficulties in producing and financing this low-key yet intensely affecting work.

Below are parts of the interview that should be new information to our readers:

How difficult was it for you to direct the film rather than acting with everybody?

Stephen Moyer: I was lucky enough to have done that before with these guys as a director on True Blood. There’s a shorthand and some trust that goes with that.

This is a very specific story to Denis and his own personal life and so there was never a moment that I wasn’t aware of the weight that carried to me in terms of telling that story and wanting to honour not only Denis but also Cathleen, who had died, and Denis’ family, but also the elasticity within that, that’s needed to tell a piece of entertainment that the audience will leave with something that they can talk about whether it will be mental health or some hope in some way, so that’s the kind of weight that one carries but the one thing that I could never question was these guys trust or worry in that because I felt very connected to both of them in terms of lifting me through it.

What do you guys think this film will bring to the discussion that’s going on right now around mental health?

Denis: Early on we talked about ways to not just finance but partner with people, and I always felt a little off about trying to exploit the idea of suicide and I’m glad we didn’t do that

Stephen: We had someone who is part of a charity for suicide who at one point was going to give us money, which we were very thankful for because it’s a very hard movie to get made financially, but there were difficulties attached to it because there were different ways each charity wanted the story to be told and we didn’t want to be told how to tell the story.

Denis: It’s not a simple story and it’s not a simple issue. We’re not saying, “Here’s the answer, and here’s what you can do to make that happen.” It’s not that kind of story, it’s the story of one family and how they reacted, it’s weird how it’s happening in this moment, with this attention… I think that it’s all good. Anybody who’s going to watch it, they’ll take away their own personal reaction and I think they won’t feel so isolated.

Stephen: I think the other thing that hopefully we managed to do, and what Denis’ screenplay does, is it’s about truth, and the truth is ugly. And that’s ok. If that’s what you come out thinking, that one’s own experience of one’s own scenario has made you feel selfish or guilty in some respect due to something that has happened to you, that’s also okay. Human frailty and human failure is part and parcel of the makeup of who we all are and that’s ok, and that’s what people don’t talk about.

Denis: And that’s what Anna does so well in the movie, the idea of who is this person? There’s a multiplicity to the person, there’s who that person is too different people and that’s what’s portrayed so beautifully. And at the end of the day, why did she kill herself? There is no answer. With Anthony Bourdain, they’re trying to figure out “Was it this?” “Was it that?” What does that answer give you if you have the facts in front of you? I don’t really think it gives you anything ultimately. It’s always going to be a puzzle.

Anna, how do you approach playing a character who only exists in peoples memories?

Anna Paquin: Well, basically each little individual vignette is its own person that has integrity and truth in that scene and it doesn’t have to have anything to do with what’s playing in any of the other scenes. There’s actually something really freeing and wonderful about that because obviously you can’t erase knowing what you did in some other scene but being allowed to just respond to the sibling whose memory it is and not actually trying to fit them altogether in one piece of a puzzle because that’s not what we’re doing and the story we’re telling. As an acting exercise that’s quite interesting in terms of being someone who doesn’t exist other than in memory.

Stephen: It’s also a two-fold issue in that not only were these guys, specifically Anna and Denis’ writing of that character, not only is it just the memory of that specific person but also we all are different with specific people. I might be incredibly vulnerable with Anna, but never let anyone else see that. I might be incredibly needy with a friend because I know that they’re going to give me that part of myself that I might not let anyone else see, and I think that’s a fascinating human frailty again, but also we show the fallibility of memory as well. So it’s a difficult conundrum.

It’s interesting actually because you can literally save a day shooting by taking all the ‘ands’ out of a script – which sounds bananas – but when you look at a 100-page script say, that’s a 22-day shoot.

Anna: Page count equals days, equals money, equals the overall budget, which is literally what it came down.

Stephen: To finish what Denis was saying about the comedy, it’s such a difficult subject matter but you want to entertain the audience. The first cut was almost raucous, but the problem is when I put that together and was happy with it and thought we had a very interesting, funny, dark film.

But the problem was when you put that in front of people who don’t have the history of knowing these characters and knowing us and they see these characters for the first time, laughing on this particular day, it makes them look callous. It’s ok for them to be ugly and have dark thoughts and be selfish because of what they’re going through, but you have to understand that, you can’t have them laughing on top of it, not straight away, you have to earn that. It’s a real tightrope.