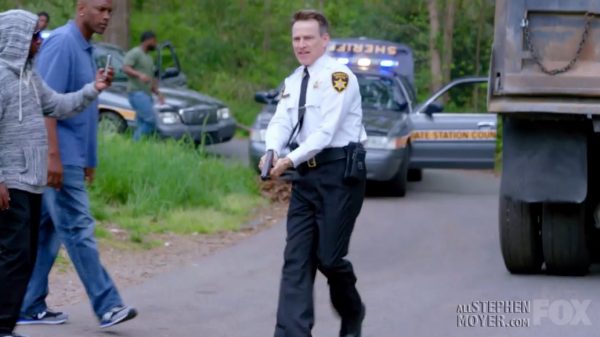 Stephen Moyer fans are anxiously looking forward to seeing him again on screen.  One of hi upcoming shows to premiere sometime in March is Shots Fired on Fox. This is the network’s first try at a true event series not tied to an existing property. If it works, maybe we get another season of the show set in a new city, following a new case, or maybe we get a whole new show entirely, tackling a different issue in a similar tone. There are a lot of options… if it works.

Stephen Moyer can be applauded for always trying something new, timely, and different showing his versatility. Personally, we are anxiously awaiting it’s premiere, and this review helps to whet our appetite for the next Stephen Moyer TV show!

Below is a review by Forbes.com which gives us an early glimpse at the series that we so anxiously await.

One of the biggest news stories to emerge in the 2000s has been the reality of how divided many parts of the United States (and the globe) are by race, and how this division has spawned debate on a variety of issues including police brutality, mass-incarceration, private prisons, militarized police and more. While these issues have always existed, the advent of modern technology has brought them out in the open. Now, a new event series is hoping to shine a dramatic light on them in primetime. That series is Fox’s Shots Fired.

In a fictional North Carolina town, Shots Fired follows aftermath of the shooting of a young white male by an African American police officer. In an effort to avoid “another Ferguson,” the DOJ assigns prosecutor Preston Terry and investigator Ashe Bell to work the case. However, what they uncover upon arrival in the Tar Heel is a system of racially biased corruption that has been brewing far longer than in the few days since the shooting.

There’s no attempt by Shots Fired to create metaphor for its subject matter. This show is not about something meant to represent the racially divided nature of modern America, it IS about the racially divided nature of modern America. By removing subtext, Shots Fired is giving itself an opportunity to discuss its point-of-view in no uncertain terms. The creators of the series claim the show to be a look at all sides of the coin, but it’s rather more of a look at how a different side of the coin lives.

What we see in Shots Fired is a series about the part of the country that’s been mostly ignored post-2000 election. The part of the country that’s now making waves for what lead to a Trump presidency. The lost and forgotten. Those are the people being analyzed in Shots Fired. Through the lens of racial inequality, Shots Fired is trying to bring to light issues far more Americans face than citizen living in New York, Los Angeles and Chicago care to admit.

Concerning the matter of entertainment value, the show finds the best of itself starting in the second episode, after setting up the players of the season. The first episode is very much an introduction often hampered by the weakest-link of the series. Instead of treating the protagonists as Law & Order archetypes that come in with point-of-view but little seen personal lives, they are given more back-story and in-the-field personal drama than should be allowed. It overpowers the show’s message at times.

Might one want to know where the new Fox event shines, it’s in the moments removed from the protagonist DOJ employees. When we get to dive into the meat of the community. The kind of community thought lost to the age of the iPhone. Then, where Preston and Ashe do their best work is when they’re seeking justice under the rule of law and all its outdated short-comings, not in the personal victories and losses of their family and dating lives.

Shots Fired is a worthy series that makes no attempt to hide what it is. It’s a direct response to the events of George Zimmerman’s acquittal, the Ferguson riots and more – a direct response told from the point-of-view of artists that rarely have their voices heard. The first six episodes have a lot to say, and much like the movements it’s inspired by, it has no qualms about saying those things loud and proud. Going forward, that brashness will become its biggest asset.

From this review, I can tell that we are in for a powerful series that will be a real “eye opener.”  Are you as excited as we are to see it?  Let us know by commenting below.

Read the article at: forbes.com