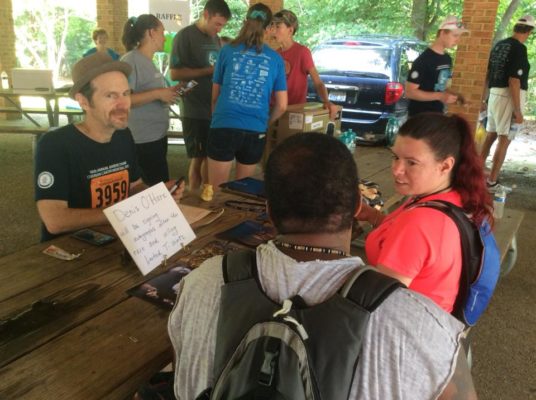 Over the weekend, Denis O’Hare had his annual family 5k run in Virginia and our friend Michelle who runs the Denis O’Hare Appreciation Group on Facebook attended. Denis talked about CASM’s film, The Parting Glass.

Below is a photo of Denis O’Hare at the 10th Anual hareandtortoiserunwalk.com. The O’Hare family works hard to help Mr. John O’Hare put this together. They have raised $1000’s of dollars over the years and all of it goes to fund clinics to help poor women with #OvarianCancer.

Denis mentions that the trio, Stephen Moyer, Anna Paquin and himself continue “playing the Festival circuit” and, so far the film will be shown at a total of five festivals.

Next on the schedule is the Mill Valley Film Festival in October where the film will be shown on the second day.

They will also attend the Savannah Film Festival on October 26 and, the film will also screen at the Leeds International Film Festival in England which takes place sometime in November.

UPDATE: The FINAL schedule for the Savannah Film Festival is out and the screening will not be on September 28, 2018.

A full list of the five festivals where CASM’s The Parting Glass is to be shown:

Denis mentions that they hope to get the film screened at more festivals. This will give them a better chance to get distribution and seen in cinemas. Fingers crossed!  I personally want to see it!!!

Denis O’Hare is one busy man. He is currently working on many projects. Learn all about it by listening to the full interview with Denis below: