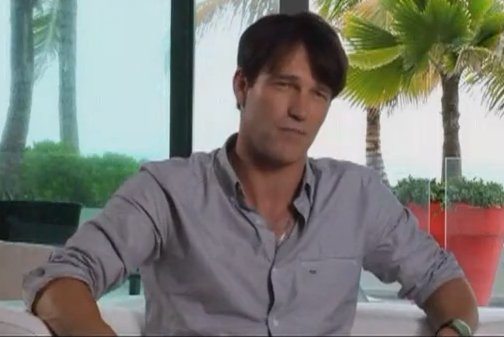 CRAVEONLINEMEDIA’s William Bibbiani interviewed Stephen during his press junket for The Caller and he glamoured them, just like he has done to all us Bill fans. He says:

“Well, I’m on Team Bill now after talking to Stephen Moyer. I never really took sides on True Blood but he is such an engaging, responsive interview. Moyer stars in the new movie The Caller. Mary (Rachelle Lefevre) receives a phone call from the past, and it turns out the person on the other line can impact the present. Moyer is the night school teacher she befriends in Puerto Rico. Moyer called from Puerto Rico where the press junket is surviving inclement weather, and we talked about his movie roles and hit TV show.”

GET STEPHEN MOYER ON SNL CAMPAIGN

We have been running a campaign to get Stephen Moyer on Saturday Night Live. Look for the part of the interview below where Stephen is asked about being on the show.

To help with our campaign to get him on the show, please go to our “Get Stephen Moyer on SNL” Facebook campaign page by CLICKING HERE and hit the LIKE button.

Below is part of the interview with Stephen where he asks questions that have been sent in by the fans. It was really difficult to cut out much because the fan questions were just really fab! Read it and see how he “charmed the interviewer.”

CraveOnline: Well, I have some questions of my own and some from fans, so I hope you like them.
Stephen Moyer: Me too, otherwise I’m going to be very upset.

CraveOnline: After dealing with vampire mythology for a few years, did you want something easy to explain like time travel?
Stephen Moyer: Yeah, like time jump continuum, something like that, something simple. [Laughs] It is pretty confusing. I was interested in the idea of it, whether we could make this work, this idea. Whether it was actually real, we met a math physicist professor who talked us through the math of this to actually work out if it tracks. Mathematically, our movie is absolutely possible.

CraveOnline: What was it like working with Rachelle and how did you develop such a chemistry with her?
Stephen Moyer: We got together with Matthew. We talked about each scene and how to try and make them as real as possible. One of the things I think Matthew has done incredibly well is to track the development so that you believe – because she’s obviously so cautious to begin with because of the relationship that she’s had with her husband and the divorce and what she’s going through and moving out and her mom and then the phone call – that she’s incredibly cautious and not trusting. So that’s something we talked about a lot. Rachelle is just brilliant. I think she gives a wonderful performance. I saw it for myself for the first time last and I was really, really impressed with Rachelle. It’s one of those interesting things where you only get a certain amount of time to do it and we had had an actress drop out of the film. Rachelle had found out she was doing it at two o’clock in the morning and flew in from Canada, arrived at 4 PM and I walked on set with her at 6 PM having just shaken her hand. We shot that first scene when she walks into the classroom. And then the scene out in the rain, so it wasn’t like we had a week of getting to know you at parties.

CraveOnline: I read that you’re afraid of scary movies. How did you sit through The Caller? [question sent in by Shadaliza] Stephen Moyer: I’m going to be honest with you. Even though I know how it’s done, what’s coming, I even know the script, I still jumped. I still have those moments of “oh my God, what the f*** is going to happen now?” But I really enjoyed it. I think I’m getting to a point where I’m starting to actually enjoy that feeling and starting to realize the reason people must like it in the first place.

CraveOnline: Was your family able to visit you in Puerto Rico?
Stephen Moyer: No, they weren’t. I was in the middle of doing another job. I left New Zealand when we shot this and I came here for nine days and then went straight onto another gig. So the truth is no, this one was nine days by myself, and I came in for two more days.

Crave Online: I knew you were kidding about the threesome.
Stephen Moyer: Yeah. They come a lot and I like them to see what I’m doing because they can’t watch the show itself. If there’s something that really is completely tame and it’s fine for them to watch I do try and get them there so that they feel part of it, so they actually get to come and see what daddy is doing. I think it must be odd as a kid, you know your parent is in this thing which is very successful and people watch and you’re not allowed to watch it. It must be really frustrating.

CraveOnline: What kind of big season finale can we expect on True Blood?
Stephen Moyer: We’re obviously leading towards a culmination of everything. We’ve just seen Tommy Mickens get beaten up. That’s going to have a profound effect on some of our characters. There’s going to be obviously a smack down showdown with the witches and the vampires. It’s very cleverly pulled together how everybody plays their part. I think we do that really well. I haven’t seen episode 12 yet but I do know I certainly enjoyed it very much when I read it on the page. I thought it was the most complete finale that we’d ever had.

CraveOnline: This is a question I really liked. Someone wanted to know when are you going to host Saturday Night Live?
Stephen Moyer: I’d love to do it. There are a couple of people on a couple of fan sites that are Bill fans who have started a campaign to get me on Saturday Night Live. So I don’t know. We’ll see. I’d love to do it. It would be fun.

Crave Online: What kind of character do you get to play in The Double?
Stephen Moyer: A Russian ex-army maverick who’s imprisoned and he is a nasty piece of work.

Crave Online: Do you just do accents really well?
Stephen Moyer: I think that again, what I was drawn to was the accent, doing something completely different. He’s a bit psychotic. If they see Bill in that then I’m a f***ing sh*t actor.

To read the entire interview (which is well worth it), go to: craveonlinemedia.com