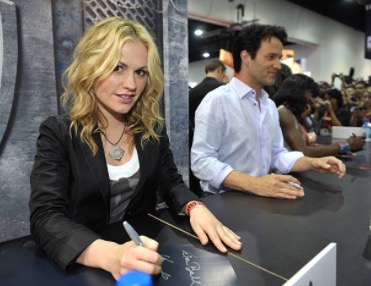 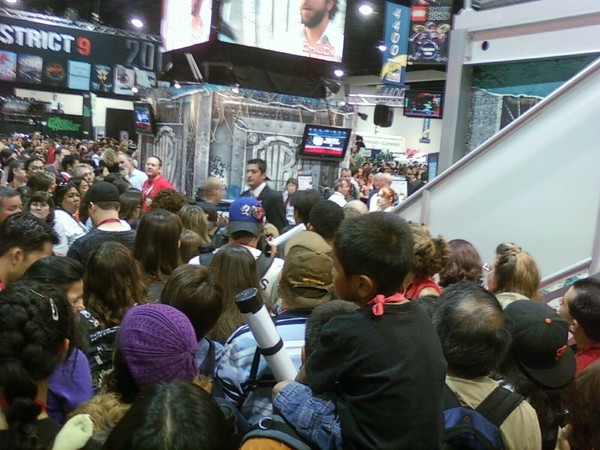 The sole intention of Saturday’s trip to SDCC was True Blood. Try to get autographs, photos, and/or into the panel; preferably in that order – but I would have been happy with any one of the three. As it turned out I got all three and more. So what a day it was! Though it sure didn’t start out that way.

I arrived in the hall at the Expo Hall at 10:30 am and went directly to the WB Booth to scope out the situation. The True Blood cast signing wasn’t scheduled until 2:30pm, but having already spent two days at the conference and knowing how many True Blood fans were going to be there – I knew the line to get an autograph was going to be crazy – but I had no idea how crazy things were going to get.

When I got to the WB Booth, there was already an “unofficial” True Blood line of about 20 people mixed in and around the Chuck autograph line. As the Chuck line moved forward, that’s when things began to go wrong – not wanting to get sucked into that signing the goal was to hang back, be near the line entrance, not where security would run you out for “doubling up an existing line” or standing in a thorough-fare. Oh and did I mention there were also still two other signings – Eastwick and Vampire Diaries before True Blood as well.

So began the 3 plus hour wait for the True Blood signing. During those three hours, the WB Staff lost complete control of the crowd and their “line” system. Because of this, it was very hard to know what to do or how to strategize what move was going to get you in. There were some folks that created the “unofficial” True Blood line that by all accounts should have guaranteed them a spot in. But that didn’t account for the secondary line forming on the opposite side that somehow was “allowed” to start or the mass group right in the middle that was allowed to stay. Anyway, this is when the craziness began, and I do mean BEGAN and only BEGAN.

Comic Con security closed the aisle at both ends which should have stopped the bad situation from getting worse, but really didn’t., they barely slowed it down. Even I who was not positioned in the best location was able to use the lax security to maneuver myself into a better position. Now I will not apologize for this – since I was indeed there in line from 10:30 am on, I asked SEVERAL different WB Booth staff what to do and how to do it (getting a different answer from each of them), so in the end I had to work for what I perceived to be my best strategic position.

By launch time minus 1 hour (and launch is a pretty accurate description,) I was in a fairly good position. I knew it was going to be close. All I could do was hope that things worked out. During that hour, there continued to be more jockeying and shifting and I actually got pushed a little further back, but right next to the booth. Since most of the folks that got in were not necessarily next to the booth – I’m not so sure that worked in my favor.

Then they start taking folks into the signing queue and the craziness really began. The pushing and shoving was pretty insane. At one point in time my arm actually got wrapped around a post and wrenched backward. All I can say is it was a good thing I don’t play softball anymore or need my right shoulder to write or type with – can you say torn rotator cuff!

As I neared the entrance, I could tell they were selecting the last couple of individuals. I heard one of the WB Staff members say, is there anyone we know that has been here waiting. Now what I had learned from the previous day at the Fox Booth is it can’t hurt to be nice, patient, and helpful with the booth staff. That lesson served me well again on Saturday, as a nice Booth worker who I had spoken and laughed with over the course of the conference remembered me and so remembered that I had been waiting for hours and made sure I was let in. I was the second to last person let in!

All I can say about the whole booth autograph line situation is that the Fox Booth used a ticket system which lead to Organized Chaos and the WB Booth system lead to Disorganized Chaos. But in the end, both systems lead to Chaos.

When it was time to get your autograph, you were given a poster for the cast to sign or you could have an item that you brought yourself. I took the poster.
On the first side Alan Ball, Charlaine Harris, Anna Paquin, Stephen Moyer, and Rutina Wesley. Then on the next side sat Michelle Forbes, Nelsan Ellis, Sam Trammell, Deborah Ann Woll, and Alexandar Skarsgard. They told you that you were not allowed to take any photos or you would be taken out or your camera would be taken away, or something bad was going to happen. Either way, I took a photo right before I started through the line and that was it.

Obviously, you couldn’t stop and talk to everyone, so just because I didn’t talk to someone it wasn’t because they wouldn’t talk to me – it’s just how the flow of the line worked out, and I didn’t really stop long in front of them. I tried not to take more of their time then had already been taken.

Alan asked how we were doing and thanked us for standing in line. He noticed my earrings and said he really liked them. It took me by surprised that he would notice something like my earrings. We asked him how they were hanging in there and he laughed. I told him that I was glad we made it through because this was going to be my sister’s birthday present and Charlaine and Anna both laughed and said, “wow what a nice sister”.

Next was Stephen. He greeted me first and was very charming. He seems to smile constantly. Which is nice, considering I was at the end of the line, so they had been signing for an hour by this time. I asked if he would sign it Happy Birthday for my sister and he asked what here name was, I wasn’t going to ask him to personalize it – so that was very thoughtful of him to offer. He made a special point to get the spelling correct as well.

Next was Rutina. I’ve noticed this season that she looks quite a bit thinner and in person she is very thin. I told her she looked great and she was very appreciative. We told her we liked the feistiness she brought to Tara, she said she liked the feisty Tara, but this Season we were seeing the more emotional side of Tara.
Next was Michelle. She greeted me first and asked how I was doing and thanked me for coming out.

I thanked Nelsan for the autograph and told him that I was glad his character didn’t get killed off. He laughed and said “me too”. I knew I wanted to speak with Sam about his guest appearance on LOCI. So as I got to him I asked him about being on Law and Order and working with Vincent D’Onofrio. He said he enjoyed doing the show and Vincent was absolutely great to work with, just a wonderful person to be around. I told him he did a really great job on the show and he thanked me for that. I was still talking to Sam as Deborah signed, so didn’t really speak with her. Alexander is really tall and very good looking. He said that he is really glad that we are getting to see Eric as more than a villain. But he said don’t expect him to go too soft and laughed.

After that announcement, it was followed by a Video clip of highlights from the rest of the Season. Lots of good stuff.

Charlaine announce that she has signed a contract for three more Sookie Stackhouse novels that will take her into 2012.
I don’t think there were any real big surprises, super questions, or anything great that stands out from the panel. Most of the questions were actually directed at Alan and Charlaine.
Michelle had the best answer to a question when she was asked why she decided to take the role, her response was, “When someone offers you an entrance where you’re standing in the road naked with a pig, you don’t say no.”

All in all it was a very successful day. I’m sure my shoulder would hurt more today if I hadn’t gotten in. I’m sure I would be second guessing a lot of things and the whole booth escapade would feel more depressing if I would have just missed getting in. So until next year ….