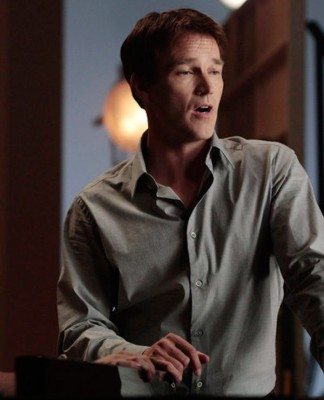 The Sound of Music LIVE was without a doubt a unique mix of theater and television and tops the ratings with 18.5 million viewers. It seems that about 99% of them voiced their opinion about the production on the social networks or in published reviews. We’ve collected some of the most interesting reviews from the mainstream press that mention Stephen. 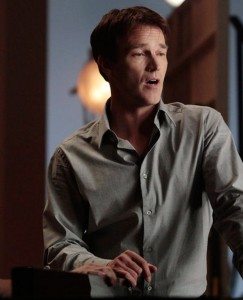 Stephen Moyer can sing!
For all I know, I’m suffering from the aftereffects of glamouring, but Stephen Moyer without a doubt proved to the world that he’s more than just a charismatic vampire with a God complex and a syrupy drawl. He’s a damn fine singer too! Whether it was joining the Von Trapp moppets in the middle of “The Sound of Music,” holding his own with Laura Benanti and Christian Borle during “No Way to Stop It” or eliciting pathos while singing “Edelweiss,” Moyer gave hope to the millions of True Blood fans that Bill Compton will bust out into song sometime next season. Your move, Skarsgård. Note to Truebies: Anyone else hoping that Eric and Godric were going show up as the SS officers escorting Capt. Von Trapp to his new naval position?

No “Sookeh”
Stephen Moyer stared at a beautiful blonde with a fondness for aprons for three hours straight and he couldn’t throw the Trubies a bone?

And as much as we love Stephen Moyer as Bill/Billith on HBO’s True Blood, we loved him even more as the mostly unlovable Captain Von Trapp. If we were Anna Paquin, we’d make him sing us to sleep every damn night. Of course, Stephen wasn’t the only TV star whose performance we enjoyed tonight…

Stephen Moyer was touching as the closed-off Capt. Von Trapp, who learned how to open up once more through music.

Mr. Moyer, who plays a sexy vampire on “True Blood,” did his best to make the Captain seem enamored of his children’s young nanny, but he kept a hand over his stomach much of the time, as if suppressing acid reflux. He came alive mostly at the side of Ms. Benanti, who, as it happens, played Maria in a Broadway revival in 1999.

Kym Karath, actress who played Gretl von Trapp in the 1965 musical film The Sound of Music:

“Mystified & disappointed so far by SOM special. So far only happy with Stephen Moyer.”

As for Stephen Moyer, the English actor has gained fame by playing a vampire in HBO’s steamy “True Blood.” Moyer’s Southern accent in that overheated series is so hilariously exaggerated, hearing him speak in his natural voice should be an improvement. As for his singing chops, well, if he can warble a serviceable version of “Edelweiss,” he won’t have too much to worry about.
And Moyer has a different set of shoes to fill as Captain Von Trapp. Plummer’s portrayal of the family patriarch in the movie was so notoriously icy, he seemed barely able to conceal his distaste for his supposed love interest, his children, and everything warm and cuddly about this most wholesome of musicals. Perhaps Plummer was focusing more on the Nazi-threat storyline, and less on the raindrops on roses and whiskers on kittens.
LATimes:

But where Underwood could have used the most help, from her love interest, Captain von Trapp, little was coming. Stephen Moyer (from “True Blood,” but with plenty of stage credits) had the anger and the stiffness the role certainly requires, but not the humor it needs. There was little sense, other than our own knowledge of the play or expectations of the form, that they were fated to fall for one another. He did sing well.

And since we are not shy to post some negative as well.

Moyer is a better singer than Russell Crowe, I’ll give him that. But he’s no Hugh Jackman. Or Neil Patrick Harris. Or Taye Diggs. Or even Nathan Fillion. His attempt at conveying an emotional hollowness just reads as mildly constipated, his furrowed eyes and pursed lips doing all the work. He doesn’t look stoic, he just looks clenched.

And yet, without Underwood and Moyer selling us on this legendary love story, The Sound of Music Live plays like very expensive karaoke.

And to close the list a funny video review by What The Buck Show.