The CLARE Foundation is a nonprofit organization in Santa Monica providing compassionate treatment and recovery services for alcoholism and substance abuse to individuals, families, and the community. We at AllStephenMoyer.com decided to support this foundation because it’s such a worthy cause. We first learned about this wonderful organization through one of their board members, and our favorite actor, Stephen Moyer.

In addition to being honored for his contributions to the field of recovery at CLARE’s annual Tribute Dinner in 2010, Stephen has volunteered in CLARE’s Drug Court program for over two years.

“The dedication that Stephen has shown to CLARE has been awe-inspiring.” – CLARE Executive Director Nicholas Vrataric.

Stephen was a speaker at the 2012 Clare Foundation Tribute Dinner and below is a photo of him from the event: 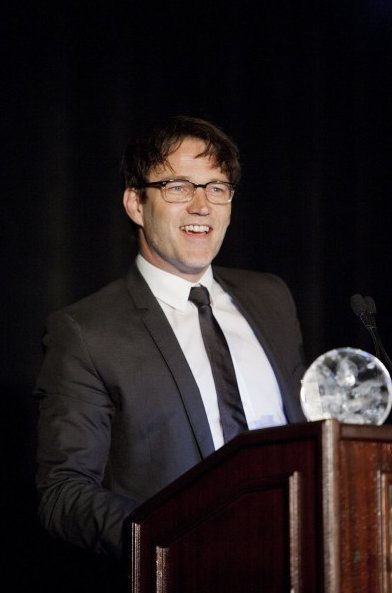 Lynn, co-owner of AllStephenMoyer.com went to The Clare Foundation for a tour last spring and learned that it is truly is everything it claims to be. She says that “the work done by The Clare is amazing and they have really helped many who suffer from substance abuse at their shelter.” Hear those that the Clare helped by viewing the “testimonials” on their web site in video form here: https://www.clarefoundation.org/videos/.

Last year we did our first fundraiser, a giveaway, for the CLARE Foundation and we raised $900. And, this year, we will host our second giveaway and intend to continue to help raise funds for this organization and show the people at CLARE what amazing fans Stephen Moyer and his show True Blood has.

Watch this heartwarming video from The Clare Foundation about the good work they do.

“True Blood” star Stephen Moyer opened up about his past bouts with addiction during a panel for Santa Monica’s CLARE Foundation, a treatment facility in Los Angeles.

Moyer has been sober for 14 years and has worked with CLARE for more than five years,according to the Hollywood Reporter.

He told the magazine that he wanted to work with the non-profit organization because it’s one that people don’t need a big bankroll to get help from.

Moyer, 45, who is married to his former co-star, Anna Paquin, said he’s never spoken about his past addiction but that everyone in his immediate orbit already knows.

“As my wife said this morning, there isn’t a restaurant in Venice or Santa Monica where I would be offered the wine menu,” Moyer said during the panel this past Friday. “The Diet Coke, which is the patron saint of drinks for alcoholics, gets put before me before anyone even asks what we’re drinking.”

Moyer said his troubles with alcohol came from his roots in British theater and emulating the public images of his heroes such as Peter O’Toole and other reported heavy drinkers.

“There’s this rush that happens from doing our job, this whirring buzz, and you want to continue that buzz,” explaining why he developed the problem that caused him to enter rehab in England 14 years ago.

“Self-loathing motivates the desire to get loaded in the first place — and post-sobriety, there is the shame of admitting all of your [faults],” he added. “It’s about education. And it’s about getting rid of that shame.”

The premise behind the panel was to focus on success stories, not just the tragedies that are portrayed so often in media.


Clare Foundation will again hold their Annual Tribute Dinner in Santa Monica, CA on November 10, 2016. Below is the invitation.  Click on the invite to see it larger. 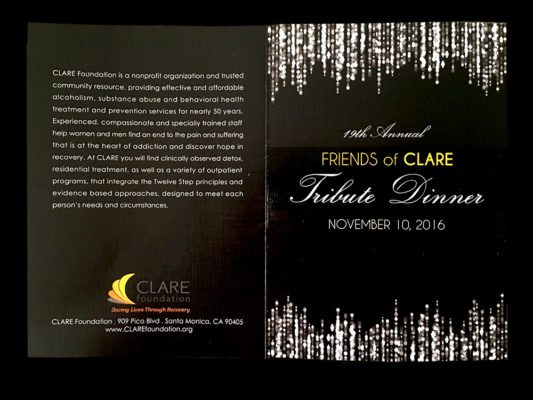 Hit that big DONATE button below and feel good about yourself because you are making a difference!

If you don’t have a credit card you can use PayPal.

Make your donation of any amount to the CLARE Foundation clicking the button below.
Send us the confirmation of your donation to info@allstephenmoyer.com and we will record your donation on Crowdrise as an offline donation.

This PayPal button was provided by the CLARE Foundation.