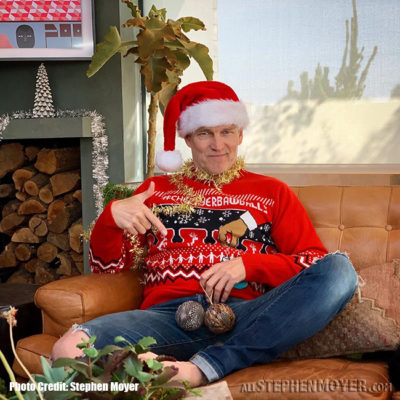 For 2020, we begin the year with a posting from Steve’s Instagram account. Our favorite actor, producer, singer, and all-around nice guy, Mr. Stephen Moyer posted the photos below. We just couldn’t let these photos go by without posting them here on the website.

It looks like the Emery family had a fun time at Christmas this year.  Below, Stephen Moyer poses with his latest Christmas sweater and some pretty big ahem, “balls.”

Yikes, that sweater sure lives up to the “ugly Christmas Sweater” tradition.

It’s true that he’s a bit late clearing up the Xmas decorations, but we can forgive him since we know he’s been busy lately with his other film and TV projects,  especially “Fortunate Son” and also the producing/directing projects for CASM.

I’m glad to see that the family seems to have had a very festive and fun holiday.  We wish Steve and all of his family the very best.

Now that 2020 is well underway, we thought it would be fun to see what Steve was up to during the past year of 2019.  What we found is listed below and I’d say it was another pretty productive year.  This guy never seems to rest.

Here’s a list of projects, that we know about that took place in 2019 (click on the links below to see all the posts we’ve made for each topic):

While it was sad news to see The Gifted end, it was exciting to see so many new projects on the horizon for Steve, especially those done by the Production Company, CASM!  I can’t wait to see what Steve will be up as 2020 progresses. What about you? Leave your comments about Steve’s 2019 below.