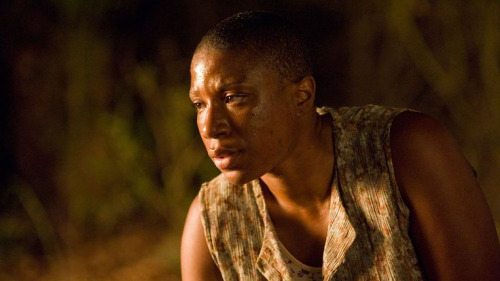 The new Fox series Stephen Moyer recently joined, “Shots Fired” is in full production and today, three more actors have been added to the growing cast, but this time the list includes a True Blood connection.

British actress Clare-Hope Ashitey, who may be most known in the USA for her role in “Children of Men,” and Tristan Wilds have been cast.  However, the new cast list also includes Aisha Hinds.  Any fan of True Blood will remember Aisha Hinds well as the actress who played Miss Jeanette, the woman who helped rid Tara and her mama, Lettie Mae of their demons.

Aisha Hinds appeared in several seasons of True Blood in the following episodes:

As we’ve previously reported Shots Fired focuses on Sanaa Lathan as an expert investigator who digs into the cases, alongside a special prosecutor (to be played by Stephan James) sent to the town by the Department of Justice. The pair must navigate the media attention, public debate and the social unrest that comes with such volatile cases, as they seek justice before the divided town erupts.

Also, Stephen Moyer is now with the cast in North Carolina and presumably has begun shooting.  He tweeted the following last night to his Twitter account:

The series is scheduled to debut later this year. We at AllStephenMoyer.com are hoping for a Fall preview.