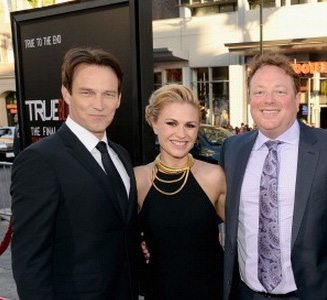 In an interview, True Blood showrunner, Brian Buckner talks about the finale episode and the decisions the writers had to make about the ending for Bill and Sookie.

Buckner explained Bill’s (Stephen Moyer) choice to die, not from Hep-V in the finale but by a staking from Sookie.

Part of Bill’s decision was to give her a normal life by having her use her fairy light on him, Buckner said, but his other motivation was the point of Bill’s flashbacks throughout the season. “It was all meant to tell the story of the natural course of a human life, and I think what Bill came around to was similar to what Godric [Allan Hyde] came around to [in season 2], which is that a human life is extraordinary too.”

Buckner, who has written for every season of the HBO drama and served as showrunner for the latest two, wanted to bring the story back to Sookie and Bill because their relationship “launched” the series,

he said. But “I think it’s obvious from these seven years that Sookie and Bill were not meant to be true love forever,” he said.
He pondered a finale — and even pitched it to HBO — in which Sookie gives up her powers, but it “felt really wrong,” he said. “The idea was that we wanted Bill to be correct when he said that Sookie could have a normal life, the twist of course being that Sookie choose to keep her power and specialness and persevere despite his belief that she couldn’t be OK without giving up her powers.”

To read this entire interview with Brian Buckner go to: The Hollywood Reporter