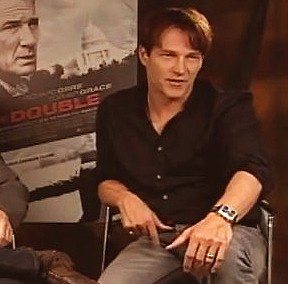 In the exclusive Blu-Ray clip below, you can see Topher Grace and Stephen Moyer talk about the form of fighting they learned for The Double, and how it helps you engage with the other person in the fight without actually doing yourself in. The Double is now available on DVD and Blu-Ray.

The Blu-Ray includes the film’s theatrical trailer and a commentary with director Michael Brandt and his co-writer, Derek Haas. They’re the writing team behind 3:10 to Yuma and Wanted, and The Double marks Brandt’s directorial debut. If you want to know more about the movie this very instant, the film’s official plot synopsis is below.

Below is a video that includes Stephen’s scenes from the film:
Purchase by clicking on the links below:
Stephen MoyerThe Double