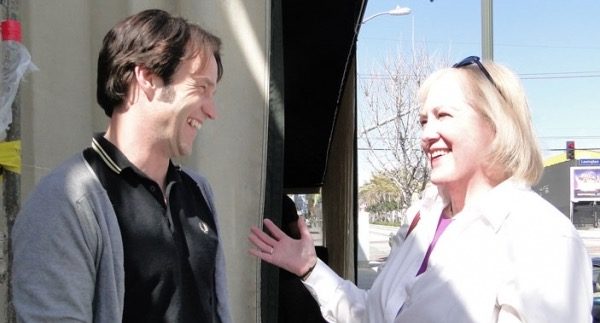 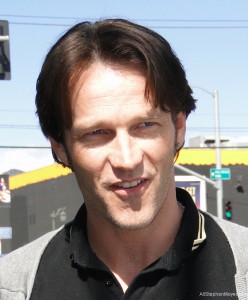 I’m still up in the clouds and can’t stop thinking about what happened while I was on my vacation. Billshuman and I were in Los Angeles this past week and never expected to have such a wonderful and memorable meeting as we were lucky enough to encounter while there. We were already having a wonderful time seeing all the sites, taking in Hollywood Boulevard that included the Oscar festivities and even saw some stars, but all of that was paled by the historic meeting we had that was truly the highlight of the trip.

On Tuesday, in Hollywood, while walking on Highland Avenue towards our hotel, Billshuman and I saw and spent time with the man, the myth, the legend, Stephen Moyer.

He was having lunch at Ammo Restaurant on Highland Avenue, which happens to be near our hotel. He looked wonderful dressed casually in jeans, black shirt and grey cardigan. Although he was in the middle of an interview and very pressed for time, he was happy to take a moment out to speak with us.

We asked him if he remembered us from last year’s PaleyFest event and he said yes, of course he remembered us and he also mentioned that he knew of Billshuman from her question at Paley and that I was a co-admin on the Vault and AllStephenMoyer.com. We asked if it would be possible to get a picture and/or video with him and he immediately got up from his lunch and came outside the restaurant for the quick hello.

I still can’t get over how incredibly natural and funny he is. As we began chatting, he immediately noticed Billshuman’s teeth and asked if she had fangs in. She said no these are her real teeth and he said I have some, too and showed us his.

He mentioned that he was a bit jet lagged, as he had just returned from London to attend the Vanity Fair Oscar party and was still getting up at 4am because he was on London time. He did look a bit tired, but he still looked unbelievably perfect to me!

We asked him how the filming of Season 3 was going and if we could depend on him to, “kick some ass” this year. He said, of course, and although he couldn’t elaborate too much, he did say, “You won’t fucking believe what they are doing to my character this season”. We asked if we might get to see a femoral artery bite also and he said, “you just might”. We’re hoping!

I then inquired if True Blood would be at Comic con this year and he said, “Yes”. He then went on to talk about how he remembers all the Eric fans from Comic con last year and that there will probably be even more fans for him this year because of Eric’s increased profile on the show, so he needs all the Bill fans he can get to attend. We assured him that we were true to Bill only and would help to rally all the Bill fans for him.

He was very affectionate, friendly, charismatic and extremely personable. Along with the photos and the video, we each got two big hugs and a kiss. He is everything I thought he was and more. Extremely gracious in every way and as handsome as I thought he would be and not only that but, he gave a big shout out to the Vault and AllStephenMoyer.com in the video. What more could you want?

For me, this was the highlight of my vacation and probably for the entire year or even longer! What a treat! Thanks Steve!

A few notes about the video written by Shadaliza:

Even though Stephen was in the middle of lunch he graciously agreed to record a quick video message and do a shout out to The Vault and AllStephenMoyer.com. So you’ll all understand what Stephen is talking about in the video, he refers to a problem I am dealing with for which I was hospitalized just a few weeks ago.

Despite what you may have heard about Lynnpd and Billshuman’s investigative activities, no restraining order for stalking has been filed (yet).

Tip for watching the video. Loading time of the video depends on your connection and the amount of viewers. To watch the video without interruptions click “play” and click “pause”, watch the blue bar and let the video load completely before hitting “play” again.

CLICK HERE TO SEE ALL THE PHOTOS THIS EPIC MEETUP!