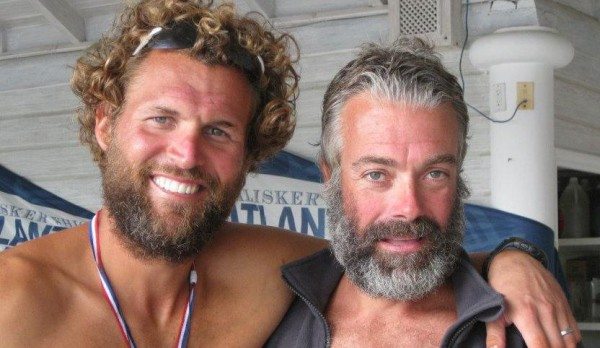 Bertie wrote his personal story in the Telegraph about the Facing the Atlantic mission that he and James Cash completed last week.

At the moment, I feel like I’ve got very, very bad jet lag. I seem to have lost my sense of balance, and although I’m now on dry land [a hotel in Barbados], the only place I feel normal is on a boat. Which is strange really, because after 63 days rowing across the Atlantic, the one thing I never intend to set foot in again, is a boat.

Don’t get me wrong. I am incredibly proud of the money we have raised for Facing The World, the charity set up by my late friend Martin Kelly; that cash will help change the lives of children with facial disfigurations. Apart from anything else, it was something I just had to do, for Natascha [McElhone, Martin’s widow, who wrote about Bertie’s trans-ocean expedition in Weekend on January 21]. She’s one of my oldest and dearest friends – we were at drama school together.

That said, though, the idea of setting foot again on another waterborne vessel, let alone our boat, Patience, fills me with dread and horror.

It’s not just my hands, cracked and flaky from holding the oars. Nor my lips, burnt and sore from the sun. It’s the memory of endless hours lying slumped in the back of that boat, in the heat of the day; I can only liken it to being laid out in a hot, wet coffin.

We did our best to stick to a routine. One of us would row for two hours, then the other would row for another two hours. Sometimes, when it was really hot, or we were really tired, we’d only row for one hour at a time.

For the most part, we’d try and stay awake during the day, just for company. At night, though, the routine was that one of us would row for two hours, while the other one slept, and vice versa. At no point on the journey did either of us sleep for more than two hours at a time.

To keep ourselves sort-of sane, during the daylight hours, we’d play that game Who Am I? You get 20 questions, and have to work out what famous character the other person is being. That works for a bit, but there were times on the trip when I not only had moments of doubt and depression, but also started getting very confused.

I’d go to sleep for only a few minutes, then wake up in a panic, thinking it was time for me to take over the rowing. At other times, I hallucinated. As the journey went on, I became increasingly convinced that there were people just beneath the hull who were conducting a noisy dinner party. I wouldn’t have minded, but they seemed to be having such a good time.

I also found myself missing home, and, for some reason, a sandwich from Greggs: I can see it now, a crusty bloomer with egg and tomato. Which is peculiar, because I never go to Greggs.

By far the worst – and best – part of the trip, though, was making contact with people back home. It was thrilling to speak to my girlfriend Sam (Scott Thomas) and my parents, but then terrible once the call was over, and you realised they were going off about their business, while all you had to look forward to was miles of empty sea. You get an acute feeling of loneliness in the immediate aftermath of one of those calls: a bit like being visited in prison, I guess.

It’s not as if there was a lot to distract us. Far from finding ourselves in the midst of playful marine life, I think we saw one blue marlin, one jumping tuna, and a few dolphins, but they were busy, speeding torpedoes, not playful, like Flipper. I don’t know where all the fish had got to: on holiday in the Pacific, perhaps. The closest we got to aquatic life was the four big Spanish mackerel I caught off the side of the boat and cooked up on the stove. They were very tasty.

The good thing about having James as my crewmate was that we didn’t know each other well beforehand. That made the relationship more professional. We made a pact at the start of the trip that each of us would make it his full-time job not to look after himself, but to look after the other. He kept me going when I was getting down, and whenever he asked for my opinion about the salt sores on his bum, which seemed bigger every day, I would encourage him by going “No, they’re looking much better” in my cheeriest voice.

Low points? Having to turn back on the third day, after an electrical failure, wasn’t exactly a highlight. Bobbing around for seven days with broken oars waiting for replacements wasn’t great either.

Then there was the day we capsized. I was sitting in the cabin listening to Highway To Hell on my iPod – Sam had made me a wonderful music compilation – and suddenly I found myself lying on the ceiling, with everything flying around. Next minute, the boat turned back up the right way, but not before a lot of things had got smashed and spoilt. Later in the voyage, apparently, we got sent lots of messages from friends and well-wishers – Hugh Bonneville, Simon Curtis, Stephen Moyer, to name but three – but we never got to see them because our computer was destroyed in the capsize.

Luckily, we didn’t encounter any storms during the voyage, but we did get into some very high seas; I spent a lot of the first half of the trip in a state of general terror, watching these mountains of water heading towards us. Just as you thought it was about to break all over you, the wave would disappear under the boat, and you’d never see it again. All that fear wasted.

Worse than the drama, though, was the drudgery. It would take 90 minutes each day to collect and purify 20 litres of water. Cooking was no fun, either; it took ages, and you’d get boiling water spilling all over your legs. In the end, we decided to cook breakfast and lunch at the same time, just to get it over with.

Lack of space was another infuriating thing; there was simply no room to do anything, and when you banged yourself against something, it was always hard and sharp. Mind you, there is an upside to being confined with one person in a cramped space, which is that you realise early on that you can’t afford arguments. As a result, we would air an issue early on, before it became an argument.

In the final analysis, I think what kept me going was simply the fear of failing, which is, and always has been terrifying to me. I just wouldn’t have been able to look Sam in the eye again if I hadn’t completed the journey. Whatever setbacks befell us, the notion of giving up and limping back home was unthinkable.