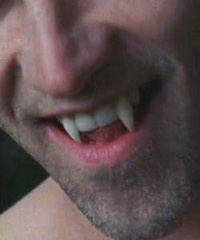 No True Blood without vampires and no vampires without fangs. But what makes the True Blood fangs so special? In what way are they different from other fangs? All about the FANGS!

All the dental work on our favorite vamps is done by Dan Repert and his team at MasterFX. MasterFX is an award winning prosthetics, animatronics and character effects company responsible for some of the most impressive, scary and gruesome scenes ever seen in modern movie.

Stephen Moyer had some difficulties at first trying to speak with his fangs in: “As a kid, I had to wear a retainer to push my teeth straight, and it’s kind of like having a retainer. You have to learn to talk with them in. There was this hilarious thing, in episode three or four, where there are four vampires, all sitting around, chatting, and then we all have to have our teeth in, so everybody reaches down and sticks their teeth in and they start talking funny, and it really wasn’t very cool at all. It’s quite difficult, but we’ve all gotten much, much better at talking with them in. And, we’ve reduced the back plate on the teeth a little bit, so people have gotten better at talking with them in.”

He adds that kissing with fangs is really hard. “You can’t do a proper open-mouth washing-machine-type thing. They are sharp!”

And portraying his love-interest Anna Paquin knows all about that. “You do get fangs caught in places,” Paquin says, remembering her first lip lock with Bill’s lethal teeth, which pop down when he’s lost in bloodlust. “Perhaps it’s like people with braces trying to make it work. Puncture wounds aside, one gets used to it,” she teases. 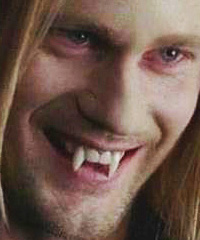 Dan Repert recalls: “Way back before we even did the pilot, Alan Ball called a meeting with Todd Masters (MasterFX founder) and myself to come in and talk about vampire teeth. They wanted something new; they wanted something no one’s seen before, and they still want it to be sexy and cool.

And the first thing I thought of, and the design that Alan really liked, is modeling the teeth more mechanically off of the way snakes teeth work, the way they unfold from the back of the palate of the mouth as opposed to disappear from, like, a stiletto-type action from the gums. And Alan really liked that idea, and, again, it was based on basically the way the anatomy of a snake’s inner mouth works.

Obviously we didn’t make it needle-thin like a snake’s would be, but we basically mixed what was already there on a snake with what’s already there on a human, and even down to the detail of the fang – which I doubt we’ll ever see in the show – but there is little holes where they would suck the blood up, up through the fang.

We started out with doing some Photoshops, and that was the one Alan liked the best. But then it also came down to this is in terms of – what we thought out on this – we were talking to the visual effects, who were actually doing the fang emergence from the palate.

That was always decided: that was going to be a visual effect. But everyone had a different idea about how that would look. So what we did to make it so everyone was on the same page – all the animators, all our guys making the actual prosthetic fangs – is we made a mechanical mock-up that actually shows this.

It was the upper and lower palate and the tongue and the teeth of one of the actual performers. It had a little mechanism on the top that you pulled the levers. And the really cool thing about these teeth – which isn’t really like a snake – but the eye teeth that you see in front are actually false little fronts, and they fold back into the gums as the vampire/snake teeth come out.” 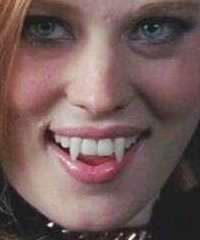 Alan Ball explains: “In keeping with our idea about the supernatural being a deeper more profound manifestation of nature we really thought a lot about the physiology of the fangs. And we created fangs that actually lie flat along the roof of the mouth and than click into place when a vampire is in danger or aroused or ready to feed. Much like a rattlesnake’s fangs click into place.

We actually created a model of teeth with showing how the fangs click in and click out. And we put the fangs not with the forefront teeth between them but with only two because it worked better for the physiology. I like that because it looks different and it’s not like the classic thing and there is a sound that it makes when they click, like a weapon being loaded. It really works well for the show.

All the actors, even when we cast guest vampires for only one episode, they have to go to the dentist and make impressions of their teeth when they make fangs. It’s hilarious to watch the dailies because the actors will make a face and then we’ll stop and everybody will go and get their little plastic cup with their fangs and put their fangs in and then the scene keeps going.

The extending and the retracting of the fangs is done with a visual effect, we have to place little dots on the actors face as tracking marks. So if you every watch an unfinished cut of our show there is some unintentional humor in those moments.” 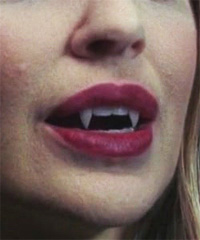 “The first time I had to say a line with those teeth in, I had never worn them. It was the scene with Jason Stackhouse when he comes to Fangtasia and they said “you’re going to say your lines, we’re going to keep the camera rolling, put in your teeth and say the line again.” And I said: “Can I rehearse that?” And they we’re like: “ROLLING”. They handed me my teeth, I put them in and what came out of my mouth… one tooth got caught inside my lip, one got caught outside my lip and I sounded like an evil Bugs Bunny character. And the entire set, which I could not see because we were shooting at night and there was a bright light on me, all I heard was that I brought the house down, they were laughing so hard.
I went to Stephen (Moyer) and I asked him how the hell do you speak with these things in? And he told me exactly what to do. He said that you can’t try have the teeth avoid your bottom lip, you just have to take the pain.”