So far we’ve been led to believe that Reed Strucker has no super hero powers and nor does he have any relation to other Marvel characters. However, why did the writers of The Gifted use the last name of Strucker in the series for their, what we were led to believe, normal family? So, we have to ask ourselves what could the connection be? Could Reed Strucker end up being Baron von Strucker?

Stephen Moyer is no stranger to playing supernatural creatures.  As his fans know, he’s played a vampire twice, once in Ultraviolet and again in True Blood.

In the Marvel Universe there is a character named Baron von Strucker who could have a family link to the Struckers of Atlanta.  While the children already have shown they have mutant powers, we wonder could Stephen Moyer’s Reed Strucker also have them and either not know it or is hiding it?

Read about Baron von Strucker below:

Baron Strucker, a former Nazi officer, is one of the leaders of Hydra and an enemy of S.H.I.E.L.D., the Avengers, and the interests of the United States of America and of the free world in general. He has been physically augmented to be nearly ageless. He has been seemingly killed in the past only to return to plague the world with schemes of world domination and genocide, time and time again. The character has been portrayed by Campbell Lane in the 1998 TV film Nick Fury: Agent of S.H.I.E.L.D., and by Thomas Kretschmann in the 2014 film Captain America: The Winter Soldier and the 2015 film Avengers: Age of Ultron

Baron Strucker is a highly intelligent man in peak human physical condition. He is an exceptional hand-to-hand combatant, swordsman, and marksman. He is also a consummate military strategist and spy, and a master of disguise and excellent actor. He carries a sword and traditional firearms, but also wears the Satan Claw on his right hand: this metal gauntlet amplifies his strength and emits powerful electrical shocks. Strucker also uses serums developed by Hydra, enabling him to maintain his physical vigor at its height and retard his aging process, so that physically he remains the same, despite his advanced age.

In the Marvel Mangaverse Strucker was a leader of Hydra, as well as a powerful wizard. He attacked Stark Island and summoned Dormammu by using Stark’s gate to the Negative Zone. After that, Strucker was attacked and killed by Mangaverse’s Doctor Strange in a magical duel.

So far in the series, the Strucker kids on The Gifted shared little in common with their potential comic book counterparts. It’s also clear that Reed Strucker (Stephen Moyer) is a far cry from Wolfgang/

Without getting too deep into it, there’s plenty of precedent that says the von Strucker twins could be used in The Gifted as they’re unlikely to ever appear in the Marvel Cinematic Universe (MCU). They’re also mutants, putting them in line with Quicksilver and Scarlet Witch. And given that Marvel TV is co-producing The Gifted, the idea the that the two studios are playing nice is not hard to imagine. But that also makes it unlikely that Reed will be revealed as the X-Men universe’s version of Baron von Strucker.

As for the similarities between the Struckers and von Struckers, their power sets aren’t dissimilar. While The Gifted presents them more as forms of telekinesis than energy projection, the balance of concussive versus destructive is kept. We also haven’t seen either Lauren or Andy use their powers without their sibling somewhat nearby. While this could be a coincidence, it would certainly add some potential conflict and power limits if the Strucker children needed relative proximity to one another in order to use their abilities. Nix has teased the concept will play out over the first season, so it looks like we’ll just have to wait and see what the characters end up sharing in common.

So far, we haven’t yet seen any evidence that Stephen Moyer will have any powers in the series, but that may be a ruse. Stephen has been quoted as saying “it’s nice to not have any super powers in a show and just be a dad.’  However, that may be a way of throwing us off the scent.  In True Blood, his character Bill Compton was turned into the evil monster vampire, Billith during Season 5.  Billith’s personality is the one character that Stephen has played who seems most like Baron von Strucker.   Personally, I think Billith could outdo the evil Marvel character in a fight.  However, I doubt they’d bring Billith to The Gifted, so, it still remains to be seen if Steve’s character will become the Marvel character that he is named after. 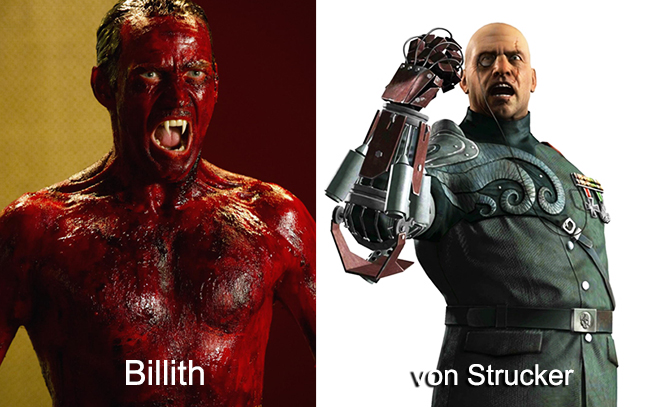 Tell us what you think about this possibility.  Do you think it might happen? Could Reed Strucker become Reed von Strucker?  Tell us your thoughts in the comments below!