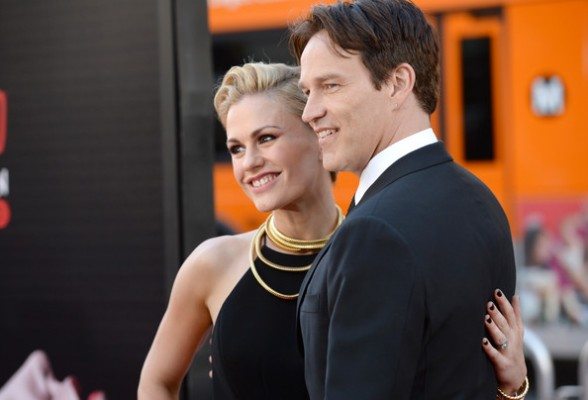 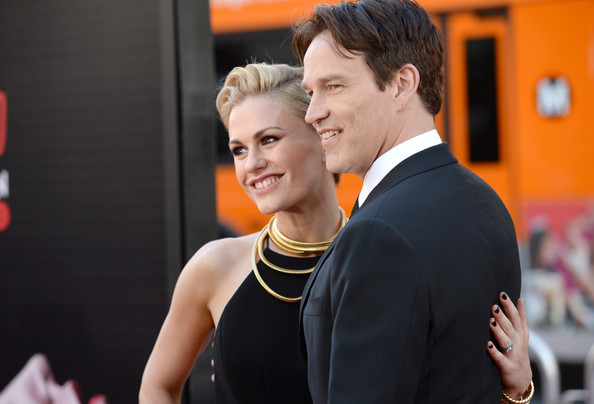 Below are there comments:

Stephen Moyer: One of the first things I remember when I think of Alex is episode 4, season 1, when he arrived. The very first time that we ever met Kristin [Bauer von Straten] and Alex was one of the funniest days that we’ve had as a pair on True Blood.
Anna Paquin: The scene at Fangstasia [when] everyone’s supposed to be fleeing Fangtasia ’cause whomever it is—cops? I can’t quite remember—come in. And then they’re supposed to be about to take flight, which I’m sure looked really great in the final product, but in reality had them on a giant skateboard being pulled along.
Moyer: We just laughed all day. And I certainly will take away whenever the four of us were together on set, it was really difficult because—and it happened a few times during the years—the four of us would turn up and look at each other and go, ”Oh f—, how are we going to get through the day?” But those [are the] days that you treasure because it is just hilarity.
Nelsan Ellis (Lafayette Reynolds)

Paquin: Nelsan is… I think blind might be an overstatement, but he is incredibly impaired vision-wise. I didn’t know this until we were in Louisiana a second year. I didn’t know how to drive, so anytime that our characters had to go anywhere, it always had to be somewhat choreographed so that Sookie wasn’t the one who had to drive. Nelsan can drive, that’s great. We’re in his car, we’re following a truck with a camera on a huge crane, and he’s been told how much distance to keep, and we keep on coming incredibly close to smacking into the camera. And I’m like ”Duuude!” [He says] ”Oh yeah, naw man, I can’t see anything.” And I was like ”What?!Information I kind of wish I had before I got into the car with you.”
Moyer: I don’t know if it was in the pilot, but certainly the first season, he started calling Rutina [Wesley, who plays Tara] ”hooker.” It was not in the script. Absolutely not in the script. She walked in one day, and he went ”Hey, hooker, how are you?” And she kind of laughed, and it stayed and she became ”Hooker.” And the writers write it in.
Rutina Wesley (Tara Thornton)

Moyer: Feisty. Like, gymnastic powerhouse. She works so hard. [We] don’t have thatmuch stuff to do together…actually, I remember her from episode 2, season 1, was the first scene I had with her, and then I didn’t work with her for ages, in the scene we’re in Gran’s house and she says, ”Did you keep slaves?” You could see, one of the things I think she was great at doing, was showing that feisty edge of Southern. And everything was always about protecting Sookie for how she had been treated her entire life, and Sookie was her rock. And I loved that stuff.
Paquin: Rutina is one of my best friends. She’s incredibly smart, she’s fun, she’s kind, and she’s a total toughie. We both don’t take a lot of s— from a lot of people, and we just really clicked. She’s one of those people [I] felt very quickly that we could’ve known each other our entire lives. It just never felt like, ”Oh s—, I have to pretend we’re besties and I just met you.” It was just one of those the people where it was like, ”Oh I get this.” She’s a great girl.

Paquin: He’s obviously absurdly good-looking—in that way I’m not sure if anyone remembered to tell Ryan he’s absurdly good-looking. He doesn’t have that sort of cocky [demeanor], which is why Jason’s swaggery, chicks-fall-over-for-me thing actually seems really endearing. Because it doesn’t come from this sort of entitled, arrogant place from him.
Moyer: He is, I think, extraordinarily gifted and will make the craziest s— work, in terms of what he’s gotta do. He’s one of those people, as well—and I love this in actors—who absolutely is happy to make himself look stupid without thinking about what he looks like. The audience can see that this person doesn’t care, and therefore it’s funnier. There was a moment where he slipped in over in a goo pile this year, and everybody laughed. No question, it was an accident. And I went, next take, ”I liked the slip in the goo pile. Maybe you can do that again.” [He says,] ”Oh did you liked that, mate? I put that in for you.” And he was saying to me, ”I did that on purpose.” And I almost believed him.
Paquin: Also, he’s just so f—ing nice.

Paquin: She’s the Barbie doll that I never had as a child, my real-life Barbie doll. She’s vampire Barbie.
Moyer: But she is such a beautiful, sweet soul. We’re very, very close to her, and she is all heart.
Paquin: She’s so, so sweet and emotional. She’s as warm and lovely and personable as Pam is bitchy, cool, and sarcastic. It couldn’t be more polar opposites.

Paquin: She’s amazing.
Moyer: When I think of her, I just have huge warmth. Getting to work with that girl, I consider [myself] to be one of the luckiest people on the show because I get this one [gestures to Paquin], which is my love interest, if you like, even when they’ve both tried not to be it’s been impossible for them not to think of the other. And Deborah Ann, as in love of the heart, of that sort of parental love. She’s an astonishing actress and she has those extraordinary eyes that just [melt] her maker’s heart. She’s a great girl.

Paquin: I love Sam.
Moyer: I personally think Sam is kind of the bedrock of the show because we’re sitting in [Merlotte’s Bar & Grill] for a reason. We’re sitting here because this is where Sookie and Bill meet, but they meet at Sam’s place. And what I think sometimes the weight that he carries is underestimated. He is a supremely gifted actor and sometimes one of the problems with being as good as Sam is that he sort of is underrated. But this world—
Paquin: Doesn’t exist without him.

Moyer: Joe is a sweetheart, actually.
Paquin: He’s incredibly hard-working. He’s incredibly committed to every single detail of his character and of the show.
Moyer: Trying to always make it as good it can possibly be. He always has great backstory built in. He has other lives going on. Everything has a consequence so when he’s playing something he’s always thinking how it’s going to affect his relationship with his dad or his relationship with [the characters in his life], and that’s really good work.
Paquin: And it shows. He only came onto the show three seasons in. So his backstory isn’t on camera. He didn’t live it as an audience. He’s kind of having to jump in.
Moyer: I, also, have directed all of Joe’s sex scenes.