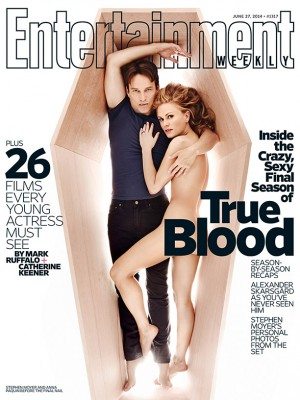 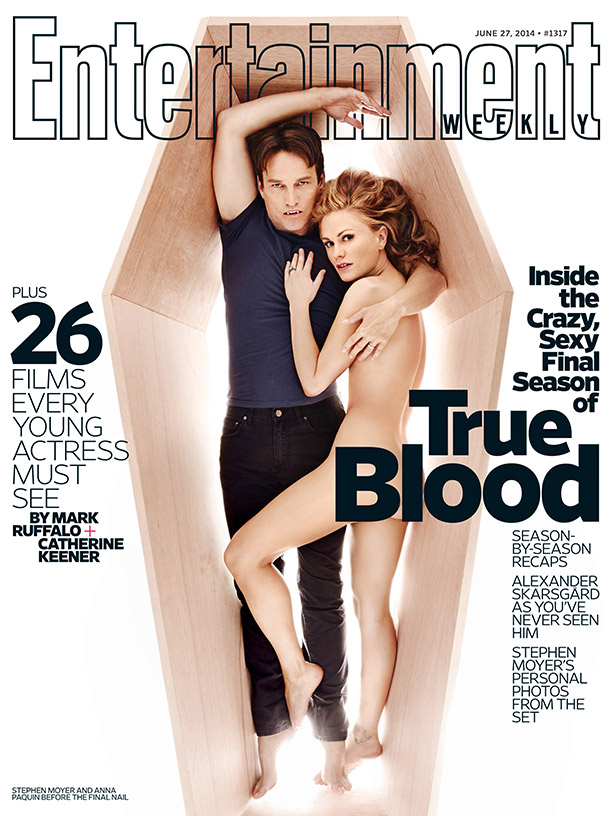 The golden True Blood couple graces the cover of the new Entertainment Weekly of June 27.

EW sat down with Paquin and Moyer at Bellefleur’s, in the very booth where Bill first saw Sookie, for a revealing look back at their bloody good time in Bon Temps. Here’s a brief tease:

ENTERTAINMENT WEEKLY: Speaking of nudity, in the first ­episode of the new season, Stephen you directed a love scene between your wife and Alcide, played by Joe Manganiello.

STEPHEN MOYER: There are moments where I’ll be watching on a monitor [and say], “Oh, Joe, just move your hand up towards Anna’s breast. Good. And can you move your right thumb just a little bit towards her nipple? Great.” And then I’ll go, “Babe, babe, enjoy it.” I’m certainly talking to her as “babe.” “Darling, go for it. Yeah, feel the nipple.”

ANNA PAQUIN: We set the bar very high for weird very early on. We’ve done a lot of odd sh– on this show. Actually, the potentially awkward couplings [are] not the weirdest sh– that we’ve done on this show.

MOYER: In a funny way, I feel like — without revealing too much — it’s quite interesting for us as a couple because we’ve kind of gone to places where a lot of people don’t get to.

PAQUIN: Or have to.

MOYER: And we’re still here. And I think that’s good for us in a way.

For more with Paquin and Moyer, including Moyer’s personal photos from the last 7 seasons, plus interviews with creator Alan Ball and final season teases from executive producer Brian Buckner (“Heads are gonna roll,” he reveals), pick up the latest issue of Entertainment Weekly.

Stay also tuned for the EW Q&A with Anna Paquin and Stephen Moyer this Sunday, June 22, from 8-9 p.m. ET. Submit your questions now with #AskAnnaAndStephen.