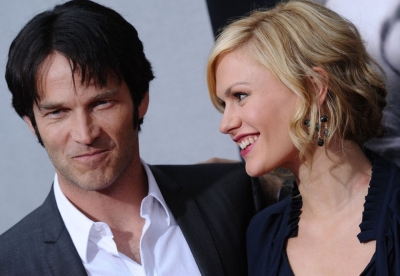 Below is an interview True Blood’s Anna Paquin where she reveals that she prefers not to talk about her personal life. Knowing that the rumors are flying around about what her relationship is with Stephen Moyer, we can understand why she prefers to keep quiet on the topic. 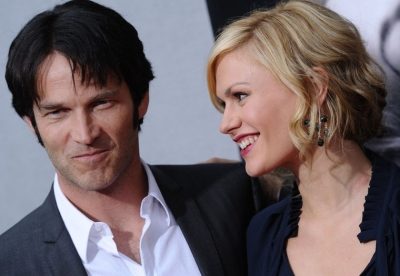 Why are vampires so bloody hot right now?

The question was put to Anna Paquin, who plays the fearless vampire lover in the hit series True Blood. “For one thing, all the people that we cast as vampires are incredibly attractive,” she says. “You know, the drop-dead gorgeous thing?”

There’s no doubt she would include Stephen Moyer in that group. The handsome English actor plays courtly vampire Bill Compton, the 173-year-old soulmate to Paquin’s telepathic Louisiana waitress Sookie Stackhouse. Compton is so stuck on Sookie, he risked turning to dust late last season in a daring daylight attempt to protect his lady love.

Moyer himself was practically dusted and fingerprinted on The View last week, when he acknowledged that he and Paquin are very much a couple in real life. Which Paquin is reluctant to do.

“I don’t talk about my personal life,” the 26-year-old woman says, practically gasping at the audacity of the question. “You can ask, but honestly, I always find that when I know a lot about the actors I’m watching on screen, I stop thinking about them as characters and I’m just thinking about some stupid thing I read in a magazine and I don’t believe them – even if they’re really good.”

The Oscar-winning (for her screen debut as a wide-eyed 9-year-old in The Piano), Emmy-nominated actress scored a Golden Globe for her unflinching performance as Stackhouse last season. Still, she doesn’t want people to be watching her with Moyer making out in a steamy scene in True Blood and thinking, “`Well, I heard that they’re together.’ I just like to keep whatever I’m doing in my life off the radar.”

She’s fine with talking about how the chemistry between them seems to practically leap right off the screen. “When two characters fall in love,” she says, “you hope the two actors actually have some click and chemistry on screen, otherwise it would be really boring.”

Paquin says that spark was there right from that very first reading when they met during the audition process. The Winnipeg-born, New Zealand-raised actress also gets why this whole vampire thing is a bit of a turn-on for viewers.

“The drinking of the blood and the slightly creepy sensuality and intimacy of that act, the contemplation of it and would you do it – it’s all very fascinating,” she allows.

So it’s about danger as an aphrodisiac? “Yes,” she replies, “you could say that.” You can get close to vampires, she adds, “but you never really know if you’re going to be dinner.”

This season, Sookie and Compton “dust off” their relationship after that near burnup in broad daylight. There’s that mysterious body outside the diner where Sookie works. We learn more about Jessica (Deborah Ann Woll), the rebellious teen-vampire Compton had to sire to make up for killing a fellow bloodsucker. Bar owner Sam Merlotte (Sam Trammell) sticks doggedly to his shape-shifting ways. Sookie’s troublemaker sibling Jason (Ryan Kwanten) gets mixed up with an anti-vampire sect. And Evan Rachel Wood guest stars as the Vampire Queen of Louisiana.

Season Two pretty much follows the second book in the series, according to author Charlaine Harris, who had seven titles on the New York Times bestseller list earlier this year. She hand-picked showrunner Alan Ball (Six Feet Under) to bring her books to the screen and is thrilled with the results, although she says his series is a lot steamier than her novels. In the books, “Sookie’s sex life is certainly vigorous and healthy,” says the author, but everything is told from her perspective. The TV series spreads the point of view – as well as the bed-hopping – around.

Harris, who lives in southern Arkansas with her family, says Paquin and Moyer are perfect as “Sookie and Bill” and it tickles her to hear dialogue from her books on TV. She says Ball does not consult her on the series which suits her just fine. After all, she says, “he doesn’t tell me how to write my books.”

As for why the public’s so thirsty for vampire tales, Harris has a theory: “I think our culture is youth obsessed,” she says, “and the idea of creatures that stay forever at their peak, that don’t have to worry about arthritis, cataracts, cellulite…isn’t that the American ideal?”