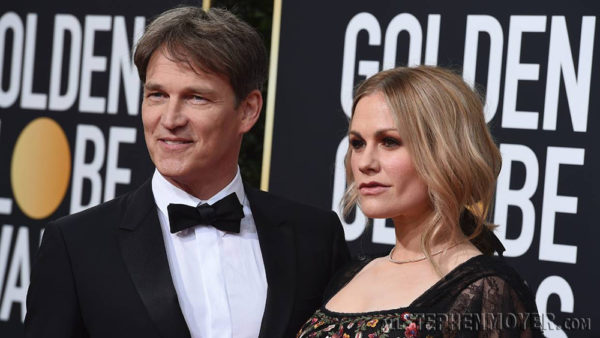 While neither Anna or Stephen were nominated for their work at the Golden Globes, they did get the prize of being one the cutest couples list as #7. Our lovely couple was dressed in Dior and Dior Men, respectively.

The 2020 Golden Globes is a night of honoring the year’s best in movies and TV, but the evening also serves as the ultimate unofficial date night for celebrities. There were A-list classics including J. Lo/A-Rod and Nicole Kidman/Keith Urban alongside red carpet debuts from Bill Hader/Rachel Bilson and Michelle Williams/Thomas Kail. Plus, all eyes are on former couple Jennifer Aniston and Brad Pitt, as each is nominated for an award tonight. But, while neither was nominated for their work this year, they made the cutest couples list as #7 while attending last night’s 2020 Golden Globes.

I don’t know about you, but it’s so nice to see them on the red carpet again and, for me, they certainly are the “cutest couple!”  I remember during True Blood it was a common occurrence, but these days, it’s not so much.  YEA!

See all the photos from this event by clicking on the button below: