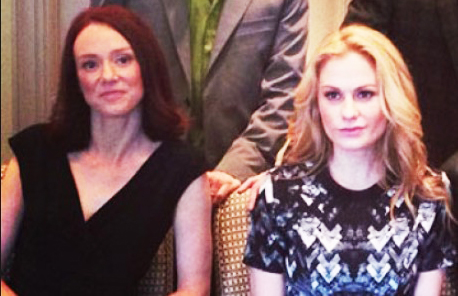 Anna Paquin, and Cerise Larkin will attend the screening of The Parting Glass on November 11 at the Leeds International Film Festival (LIFF) with a Q&A after the screening.  Anna stars in the film and Cerise is one of the film’s producers.

Leedsfilmcity.com says of the film:

The Parting Glass features perhaps the finest ensemble cast of any film this year. Every one of whom puts in a perfectly nuanced performance in a heartfelt family drama, warm and funny and heartbreakingly sad in turns. Actor turned director Stephen Moyer directs writer Denis O’Hare, Anna Paquin, Melissa Leo, Rhys Ifans, Ed Asner and Cynthia Nixon.  The group is an estranged family, brought back together when they are forced to piece together discarded belongings. Then they deal with, old memories with an unexpected and sudden loss.

Stephen Moyer, the director comments on the film:

‘I think the other thing that hopefully we managed to do, and what Denis’ screenplay does, is it’s about truth, and truth is ugly.

And that’s ok! Human frailty and human failure is part and parcel of the makeup of who we all are and that’s ok. That’s what people don’t talk about.’