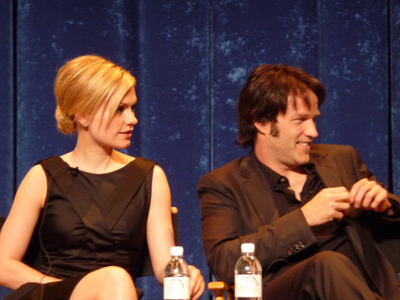 I’ve been to many fan events over the years, but something about True Blood is different. A lot of the fans I’ve talked to are new to the whole fandom experience and it’s exciting to see it through their eyes. Fandom is an amazing thing. It brings people together from all walks of life from all over the globe to experience similar interests together. Things that would get you strange looks in the real world are not only understood by other fans, but shared as well. Friendships are made that can last a lifetime.

When I found out I could go to the Paley True Blood panel in Los Angeles, I was excited. Imagine my surprise when I found out that another fan that was going and I had talked to online, lived only 20 minutes from me. We were able to travel together which made the experience even better.

We arrived Saturday and spent it and Sunday exploring parts of the Los Angeles area.

Monday morning we got ready to go to the ArcLight Cinema and the Paley event. When we got there, fairly early, there were about 6 people in line. We settled in to wait until it opened. It was a nice experience with several friendly discussions between book fans, Bill Fans and Eric fans. Our “Billsbabe” shirts were getting a lot of attention. It was also interesting seeing the number of male fans in the audience. Most fan events in my experience are populated mainly with woman with one or 2 men there. This time the mix, while admittedly largely female, had a lot of males as well.

Finally it came time to go in. We got seats in the third row and settled down to wait for it to start. The first thing up was a clip from Dark Shadows. After that clip was shown, they played about 10 minutes worth of clips from the first season, which had all the fans singing along with the theme song and reciting the lines with the characters. They finished up the clips with about 3 minutes of scenes from season 2 which looks like it will be very interesting. Then the host of the event said a few words. Finally, came the cast introductions. First up was Alex Skarsgard, entering to screams of delight from the Eric fans. Next was Carrie Preston, looking lovely in black, then Nelsan Ellis, Rutina Wesley, Sam Trammel, Ryan Kwanten, Stephen Moyer, the man most of us “Billsbabes” had come to see, Anna Paquin, who is even prettier in real life, and finally Alan Ball.

It was surreal seeing them sitting there, and they seemed as passionate about the show as the fans are. They described the casting process each had gone through, as well as their favorite (or least favorite for Sam Trammel) scenes. Alan talked about finding the “Southern Vampire” series of books and how he personally bought the rights, and then brought HBO in on it. He said that he plans on sticking to the spirit of the books, but it would be impossible to stick to it exactly due to the fact that it’s a first person narrative by Sookie.

The fan questions varied, but the subject of the dirt in the graveyard came up, and Anna seemed surprised that fans were worrying about where it ended up. Stephen said they built a little shed under the ground for him to sit in, then he had to sort of “give birth, alienlike”.

One of the Billsbabes asked a question and brought the entire houses’ attention upon us. They made the entire row of Billsbabes stand up.

Most of the rest is a blur. I mean it’s hard to pay attention to what they are saying when all you want to do is stare. Too quickly it was over and they were allowing people to approach the stage. Boy what a mess. There was little organization so there was a lot of pushing and shoving going on. Stephen even tried to get people to back up so my friend Lynn, who was trapped by the stage, could get out. Stephen graciously signed my program. When asked by another autograph seeker for an autograph, Stephen responded by saying that he had to go see “his Billsbabe.” He then proceeded over to one of my friends to get their picture taken together. He seems like such a nice man who really appreciates his fans.

We mingled a little bit longer before heading back to the hotel. Some of our group were heading over to the Sendler premiere, but alas I was not one of them

Over all it was a great time. The cast seemed to enjoy it as much as the fans. They were very personable and generous to their fans and it was very exciting to meet them.