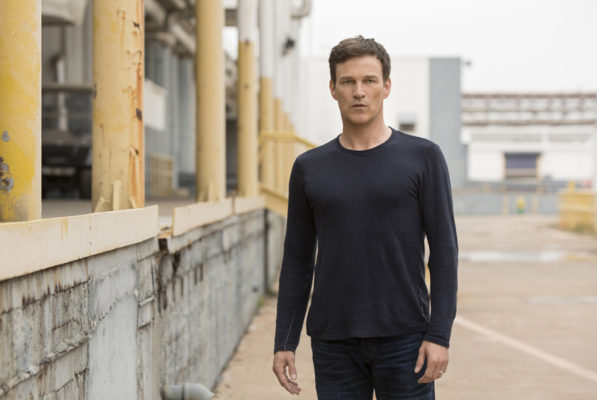 Stephen Moyer was recently interviewed about his new & future projects in a new interview.  He talks about The Gifted on Fox and recently on Safe House on ITV as well as possible future work.

Below is a portion of that interview that include the bits we think are new or more interesting to our audience.  Enjoy!

What made you take the role in The Gifted? How was it originally pitched to you?

I was in Toronto doing a directing job and I didn’t really have my head in acting at that point – not because I was stopping, but just because I was in my directing head. It kind of came out of the blue and, obviously because Anna (Paquin, Stephen’s partner) has a relationship with the Marvel and X-Men worlds, I gave it to her to read. I read it and was blown away by how prescient, topical and well written it was, and I really liked the idea of my character starting out as a bad guy in some respects. He’s a prosecutor of mutants, and I thought it was really well done because, for me, my arc is about education and learning more, and then realizing that the people he’s been working for are slightly underhand and haven’t been so truthful about those things going on behind the scenes. Anna, having worked with Bryan [Singer] four times before, thought it was a really good new version of that world.

People have pointed out some of the parallels between that element of The Gifted and similar elements in True Blood – is that something you’re drawn to in scripts?

Yeah, I saw it as soon as I read the pilot. It has an interesting framework, this kind of genre work – specifically the X-Men universe, which has always been about civil rights and was obviously adopted very early on by the LGBTQ community – there is no question that True Blood had those parallels because of Alan Ball. We even said “We’re coming out of the coffin” – it wasn’t a shrouded metaphor. So I think I am drawn to it. I like the idea of the oppressed fighting back, and of telling the story of people who are struggling in society. I wasn’t looking for it, to do something so specifically about that again. But of course, when you read something that touches you it changes everything.

You’ve spoken before about wanting to work more in the UK – is that part of the reason you signed on for Safe House?

Absolutely. I’ve worked for those producers before, and we always send each other stuff. That came up and it was such a joy to be back. It was really lovely for me because I knew all of those people, if not as friends then by reputation, and we had a ball last summer doing that. I’d love to work in Britain. I have a project which is in the process of being picked up that I’ve constructed with my production company. Whether I’d be able to do it as an actor I don’t know. And there’s another thing with Anna we’re hoping to do in the UK. I’d absolutely love to be there, and who knows – my daughter’s in school and when she finishes we might come home. With this business you just keep doing what comes in. But I’d love to find the right thing and be in London for maybe half the year.

Read the full interview over at Den of Geek.