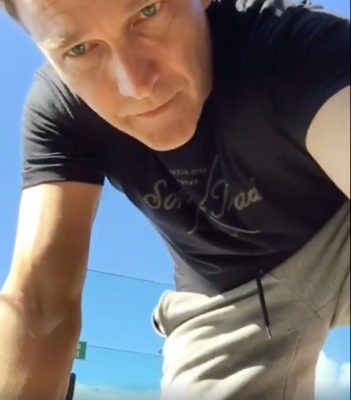 Only day 4 of the challenge and Steve is already cheating! But with a good reason…. from Anna’s Twitter we understand that the lovebirds will be reunited tomorrow (Friday), so Steve is probably flying somewhere and doing pushups on a plane might just be a little weird.

So today Stephen does a double whammy and calls out 2 friends to join the challenge. First up American actor John Ales, currently starring in the series Sex&Drugs&Rock&Roll and who worked with Stephen on the film Uprising. Recently the 2 mates shared old pics of each other on Twitter.

Second one to be called out is Iddo Goldberg who was also part of the Uprising gang and who more recently was seen in Peaky Blinders (a must see) and Salem. Since Steve calls out 2 friends, we did expect a double whammy of the pushups as well. Not 22 but 44! Cheater!

The #22PuchupChallenge was launched in support of US and UK veterans to raise awareness for the mental health challenges they face. Many (ex)service men and women suffer from PTSD and an average of 22 (ex) military commit suicide every day (!).

Join in the challenge or make a donation in support at the 22kill.com website.
To support UK service men and women donate £5 to Combat Stress by texting PTSD22 to 70004.