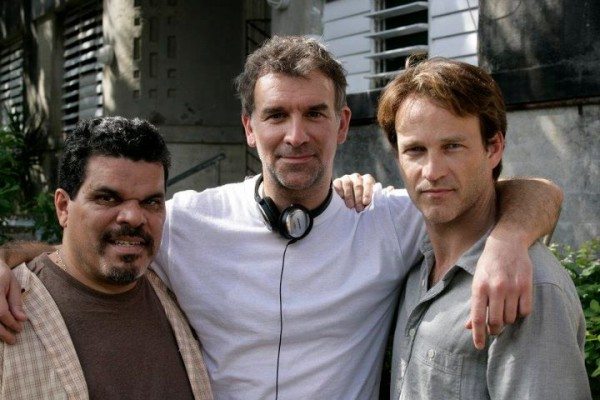 Stephen Moyer talks The Caller. MovieWeb waited until the release of the DVD of The Caller to publish the interview they did with Stephen Moyer in Puerto Rico in August.

Stephen Moyer: I am looking down from my balcony in the hotel, and people have written things in the sand beneath me. Karen has written, “I want a divorce!” In the sand. (Laughs)

You need to take a picture of that one!

Stephen Moyer: I know. Right next to it, it says, “Billy, I love you.” My friend’s name is Billy. So I did take a picture of that.

Someone is down there doing your work for you. Are you going to go down to the restaurant and find out whom this poor sap is that’s getting a divorce?

Stephen Moyer: Yes. Right. Though, I think its Karen that is being asked for the divorce. Poor Karen is probably sitting at the bar as we speak. Crying.

You guys are in Puerto Rico, right? How’s that treating you?

Stephen Moyer: It is lovely. The Puerto Ricans are fantastic. But, the hurricane has cut all of the power to the island. So we have a blackout. The hotel is running on a generator, but we have no power in our rooms. The only reason I am able to speak to you on the phone is because the emergency phones are working. We have no running water. No electricity. No air conditioning. No lights.

That sounds scarier than this movie…

Stephen Moyer: Its funny, because last night, after the movie finished, all of the restaurants and stores were closed. Because no one has any electricity. So the crew, and all of the cast, and all of the people here to support the film…We all went back to the bar at the hotel. We sat with the critics, we had some drinks, and everyone debated the movie. It was really interesting. We stayed up very late doing this. Of course, we went to bed eventually. The hotel had given everyone flashlights. Everyone had to find their rooms with these flashlights. You’d close a door behind you, and you had to sit in your room alone after you’d just watched this horror film. (Laughs) Some of the girls? They weren’t havening the best time.

I don’t know. That sounds like one of the best junkets I’ve ever heard of…

Stephen Moyer: I know! Isn’t it fucking great? We are having quite a great time, actually.

That is a pretty intimate setting to be discussing a movie with the cast and its creators. What was the general consciences about the film? It seems like, after a few drinks, in the dark, real opinions about the work can’t help but come out.

Stephen Moyer: Listen, I don’t want to jinx anything, but people actually loved it. It had a wonderful reception. So we were excited to be able to talk about it in a real setting. We talked about it for hours, and every single person had a different opinion on what they thought the film was about. That is the really interesting upshot of the film. I have been fascinated by it. I even came up with a whole new concept about it today. What I think it could be about. I watched it with the critics, and I loved doing that. I think this is a proper, old-fashioned thriller. We do all of our effects through sound and practical settings. There are no digital effects. I am really proud of that. I think it’s a great little movie.

How have your views on it changed from that initially script reading to now, sitting with critics, discussing all the different things that it represents?

Stephen Moyer: The thing that made me most excited about this project was director Matthew Parkhill. We had discussed it on the phone. He was very thorough with his concepts. And it was there, on the phone, that he offered me the part. We had a long chat about it. We had a similar sensibility about filmmaking and the films that we love. What I liked about the character was his humanity. Here is an ordinary soul that gets mixed up in these extraordinary events. I liked that he was this ordinary guy, especially coming off such a wild season of True Blood. We went pretty dark. So the thought of playing someone that was normal and ordinary was a really nice idea. I’d hoped that it would be a compelling film, but I have to be honest with you. I was surprised. I think it’s a really wonderful piece. The cinematography is wonderful. I love the score. Matthew did a great job with the editing. It’s a film that works.

I like the path of destiny that has been laid out between you and Matthew. It sort of ties in with the themes of the film. You are both from Essex. You have both frequented the same bars. Do you think you guys crossed paths numerous times before meeting, and you just didn’t know it?

Stephen Moyer: It is very possible, though at the time, I was seventeen and he was, like, fifty. I joke. We are very similar in age. And its not that big of a place. It has been lovely hooking up with him again. He is in London, and I live in America. Seeing him here, I like the feeling of being around him again.

Read the complete interview at the source.